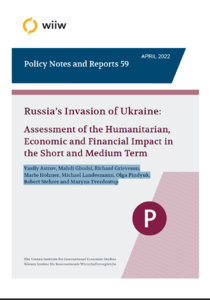 Russia’s Invasion of Ukraine: Assessment of the Humanitarian, Economic and Financial Impact in the Short and Medium Term


The Russian invasion of Ukraine has triggered a humanitarian, economic, financial and political crisis that will reverberate across Europe. In this Policy Note we analyse the short- and medium-term implications of the conflict. We find that the most severe economic and financial impact will be in Ukraine and Russia. Much of Ukraine is already devastated by the war, with around 19m people and over half of the country’s GDP in the regions currently directly affected. Meanwhile we estimate that Russian GDP will contract by 7-8% this year, and inflation will accelerate to close to 30% by the end of 2022. For the rest of Europe, the impact will be felt via various channels, with the most significant so far being inflation on the back of high energy prices. If the EU were to ban imports of energy from Russia, or if Russia itself limits or stops gas exports to the EU, the trade impacts would be much more significant. The medium- and long-term outlook for Ukraine, Russia and the rest of Europe has been changed radically by the events of the last few weeks. For Ukraine, if one part of the country is occupied and the other part remains independent, economic outcomes will be very divergent, but the non-occupied part would see many refugees return, would receive massive Western financial support and could look forward to greater integration with the EU. For Russia, the economy will lose its access to Western technological transfer, and this cannot be fully compensated by China; an already meagre medium-term growth outlook has now deteriorated further. Meanwhile there are four main areas of structural change and lasting impact for the EU and Europe more broadly: the EU will get more serious about defence, the green transition will gather pace, broader Eurasian economic integration will be unwound, and the EU accession prospects for countries in Southeast Europe could (and should) improve.