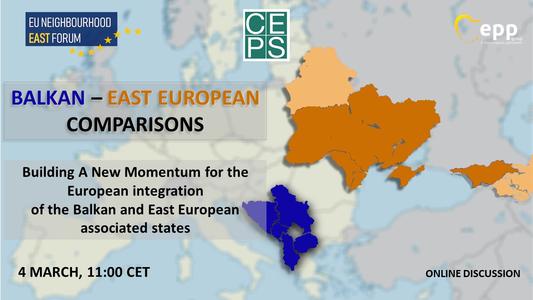 This forum event will mark the launch of the study Balkan and Eastern European Comparisons prepared by CEPS, which is bringing us a comparative picture of a converging progress made among the Western Balkan and Eastern Partnership EU associated countries.

More than a decade ago, the EU has made far-reaching policy proposals and has created the Eastern Partnership of six countries – Georgia, Moldova, Ukraine, Belarus, Armenia and Azerbaijan. This opened new possibilities for growth and investments. The most advanced countries of the Eastern Partnership, Georgia, Moldova and Ukraine (the so-called group of EU-associated Trio) have embarked on a path of difficult and painful policy reforms.

These countries have - with ups and owns - made important advances.

Furthermore, in the first five years of association, the Trio was able to catch-up with the countries of the Western Balkans, who already had an EU membership perspective. It was a result of a resolved and determined EU policy launched in the neighbourhood nearly ten years ago.

However, many things have changed since then. The EU has been constantly facing geopolitical shifts in the region, which have culminated in democratic changes we are observing today in the eastern neighbourhood. Today is the time to be geopolitical again and deal with a new set of questions:

Is the EU ready for new bold ideas to incentivise the EU-associated countries with a new architecture of EU antechamber membership instruments along with related conditions and policy benefits?