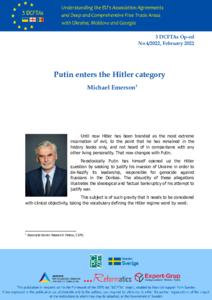 Until now Hitler has been branded as the most extreme incarnation of evil, to the point that he has remained in the history books only, and not heard of in comparisons with any other living personality. That now changes with Putin.

Paradoxically Putin has himself opened up the Hitler question by seeking to justify his invasion of Ukraine in order to de-Nazify its leadership, responsible for genocide against Russians in the Donbas. The absurdity of these allegations illustrates the ideological and factual bankruptcy of his attempt to justify war.

This subject is of such gravity that it needs to be considered with clinical objectivity, taking the vocabulary defining the Hitler regime word by word.

Dictatorship. No question for both, through to the leader isolated in his bunker, in contact with just a few members of his inner circle.

Militarist. Putin has invested in a huge build-up of his military for the beginning of his presidency in 2000, as did Hitler in his time.

Irredentist. Putin has ideologized the Russian world (Russki Mir) to embrace regions in other countries where there are Russian minorities. His occupation of the Donbas and annexation of Crimea to defend Russian people bears comparison with Hitler’s seizure of the Czechoslovak Sudetenland in 1938.

Propaganda. Modern technologies have allowed Putin to go beyond Hitler with information war and cyber attacks.

Injustice. Both Hitler and Putin had or have their grievances, Hitler over the humiliation of post-WW I reparations, Putin over broken oral promises given to Gorbachev excluding NATO expansion. But grounds for a ‘just war’? No.

Strategic lying. Putin’s voices (Lavrov, Peskov, Zakharova) kept up parroting denial and protests over “Russophobic hysteria” in response to US warnings about preparations for invasion until the day before it happened on 24 February. Like Hitler at Munich.

Appeasement – by the West. Biden said the US would not intervene with ‘boots on the ground’. Macron and Scholtz made last pilgrimages to Moscow to plead for peace. Indeed Chamberlain and Daladier in Munich in 1938 have become the most cited comparison so far.

Genocide. Hitler’s Holocaust saw murder of 6 million Jews. Putin’s war in Chechnya in 1999-2000 saw indiscriminate destruction of urban centres, costing around 25,000 lives. His military intervention in Syria since 2015 contributed hugely to the total displacement of 5 million refugees and half a million deaths. He has semi-rehabilitated Stalin whose purges in 1938-39 cost around a million lives, after the Holodomor in 1932-33 when 3 million Ukrainians were starved to death. Stalin added genocidal deportations of  Estonians, Latvians and Lithuanians during and after WW II.

Assassination. Hitler was subject to numerous assassination attempts. For Putin it is the other way round, his regime having attempted the political assassination of Navalny in 2021, while the murderer of Nemtsov in 2015 was never found; plus extra-territorial assassinations attempted (Skripal, 2018) or achieved (Litvinenko, 2006).

Blitzkrieg. For military historians the invasion of Ukraine in February 2022 with a large fraction of Russia’s entire army will stand in comparison with the Reich’s invasion of Belgium and France in 1940.

Occupation. If there is to be occupation, a discussed scenario sees a division between the left bank Dnipro, with the right bank left apart. Recall France in 1940-42, divided into a small contiguous region annexed (Alsace-Lorraine), Paris and the north and west occupied, with the semi-puppet Vichy regime to the south-east.

Resistance. Already the Ukrainian resistance takes shape with the arming of volunteer territorial defence units, and people in the streets preparing Molotov cocktails. What order would Putin give to his occupying troops, when they suffer casualties? The Hitler playbook says reprisals, Putin’s nightmare scenario.

Rationality or insanity. Is Putin an entirely rational actor, or somewhat mentally deranged? The question has been much debated over Hitler. Putin’s speeches contain are a curious mix of mastery of detail and absurdity, like on 21 February “in 1991 Russia was robbed”, when Yeltsin agreed with his Ukrainian and Belarus counterparts on independence for all three of them and dissolution of the Soviet Union. Putin’s build-up of long convoys of tanks, artillery and military transport now heading for Kyiv point to a demented reaction after his miscalculation that Ukraine would simply surrender. If he goes further ahead with a devastating destruction of Kyiv and other cities it is certain that Russia will be entrenched as the enemy of the Ukrainian people for 100 years, and Putin until the end of his days - no longer the brilliant strategic chess player, or even a rational actor, just someone who had tragically locked himself into a dynamic that ends with crime against humanity.

No comparisons are ever perfect. But the points of comparability are many and big.

Putin has pushed the European Union takes steps that were until a few days ago unimaginable. The Hitler legacy had made of the EU the most pacifist major power in the world. On 27 February the President of the Commission, Ursula von der Leyen, announced the decision to fund 500 million euro of lethal weapons to help the Ukrainian people fight. She further overturned years of the EU’s denial of Ukraine’s pleas for membership perspectives with “They are one of us and we want them in”. Zelensky followed with a request for immediate accession.

But there is one huge overarching difference between Putin and Hitler. Putin has nuclear weapons at his fingertips. Hitler had a nuclear research programme, but not time enough to produce the atom bomb.

Nonetheless Putin goes ahead with nuclear blackmail. On 24 February he said “whoever might be tempted to meddle in the ongoing events, … should know Russia’s response will be immediate and lead to consequences you have never encountered in your history. … All necessary decisions in this regard have been made”. On 28 February he put his nuclear forces on “special alert”.  Here Putin is overtaking Hitler.

Where does this leave us? The Ukrainians fight courageously and impressively at home. In Russia it will have to be for the ordinary decent people there to get rid of their dictator by means we cannot yet see. Already in August 2021 a Levada poll showed that a 66% majority of Russians prefer to be “in a country with a high standard of living, albeit not one of the most militarily strong countries in the world”, compared to only 32% who would prefer Russia to be “a great power that other countries respect and fear”. What would these data show now, if the people could see what is happening? So far the propaganda and censorship machines are hiding the truth from much of the population, and the start of anti-war demonstrations in the streets has been repressed. But this time the regime will not be able to stop the flow - through social media. As Putin’s war of occupation becomes ever more gruesome, and as sanctions deepen their bite, the Russian people will come to understand what has been happening and draw the inevitable conclusion. All families still have memories of what it was like living in a rotten state regime, protected by minimal information and maximum repression, and even how the end can come quite suddenly.