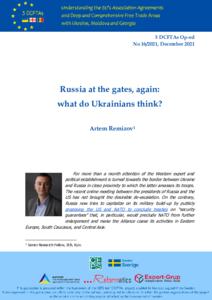 Russia at the gates, again: what do Ukrainians think?

For more than a month attention of the Western expert and political establishment is turned towards the border between Ukraine and Russia in close proximity to which the latter amasses its troops. The recent online meeting between the presidents of Russia and the US has not brought the desirable de-escalation. On the contrary, Russia now tries to capitalize on its military build-up by publicly proposing the US and NATO to conclude treaties on “security guarantees” that, in particular, would preclude NATO from further enlargement and make the Alliance cease its activities in Eastern Europe, South Caucasus, and Central Asia.

While analysing the ways to end the ongoing tensions, some observers tend to focus primarly on the geopolitical agendas and motives of the leadership of Russia, the US, and the EU, while downplaying the interest of Ukraine as a state that suffers the most from the aggressive policies of its northern neighbour. Thus, in order to have a complete picture before jumping into conclusions, it is important to understand what Ukraine’s citizens think about the ongoing situation and how this correlates with the outside perceptions of the moods in the Ukrainian society. Below we briefly present the result of the recent national public opinion polls that may help to shed some light on this issue.

First, it should be recalled that 71% of the Ukrainian population judge that Ukraine and Russia are at war with each other, and the majority of Ukrainians (53.5%) define the Donbas armed conflict as Russian aggression with the use of local proxies against Ukraine.[1] A large majority (72%) in December consider Russia as a hostile country[2] and are in favour of introduction of visa regime with the latter (52%). Moreover, a large majority of Ukrainians (76,7%) find the President Putin untrustworthy.[3] At the same time, attitudes towards ordinary Russians remain positive (75%). This may be partly explained by the fact that the same majority of Ukrainians (76%) believe that Russian citizens do not have influence over the Kremlin’s policies.[4]

Secondly, Ukrainians are dissatisfied with the current framework of peace negotiations given a little progress in the settlement of the Donbas conflict. According to the recent poll by Rating Group, 54% of surveyed think that the Minsk agreements should be renegotiated and a new document should be signed, while 21% would like Ukraine to leave the negotiation process completely. At the same time, only 11% stated that they know the substance of the accords well enough. Consequently, there is a request to change the current format of negotiations by adding the US and the UK to the Normandy talks (45%), while only 11% choose to preserve the format as it is. Direct talks either with Russia or representatives of the so-called “LPR” and “DPR” without international partners are supported by a third of respondents (21% and 12% respectively). Interestingly, when asked about direct talks with Russia as a no-alternative option, more than a half of surveyed (56%) would have them rather than not (41%).

At the same time, in the light of the aforementioned Russia’s proposal to the West, most Ukrainians (59 %) do not believe that Russia will stop its aggressive policy towards Ukraine if Kyiv drops the idea to join the EU and NATO. It should be noted that acquiring membership in these organisations is supported by the majority of the country’s population (60,7% and 52,7% respectively).[5]

Turning to surveys of Russian public opinion, a majority of surveyed Russian citizens blame the West (US and NATO) (50%) and Ukraine (16%) for the current escalation, and only 4% believe that Russia is responsible. Moreover, a large majority of Russians (75%) do not rule out that the growing tensions on the East of Ukraine could turn into a full-fledged war between Russia and Ukraine.[6] This shows that the Russian society lives in different informational environment, and it will not be a difficult task for the Kremlin to provide the Russian citizens with justification for any potential aggressive action towards Ukraine.

Last but not least, when Ukrainians are asked about their response to a possible Russian incursion, 50.2% of Ukrainians respondents were willing to show resistance: a third stated that they would take up arms against Russia while over a fifth (21.5%) would resort to different forms of civil resistance. While numbers vary across the country, it is noteworthy that 25.6% residents of east said they would be willing to show armed resistance, and 16.8% resistance in other ways. Moreover, a quarter of supporters of the biggest pro-Russian party “The Opposition Block – For Life” stated that they are ready to resist the Russian attack.[7]

Based on the results of these polls, one may conclude that Ukrainian society has a clear view on the causes of the ongoing conflict and is not willing to sacrifice such fundamentals as the integration into Western political, economic and military structures for some vague promise by the Russian side to abandon its aggressive policies in the future. The policy-makers should take into account these public moods and acknowledge Ukraine’s “red lines” when entering negotiations with the Kremlin. Otherwise, any possible deal between the West and Russia would have catastrophic consequences for the stability and security of Ukraine and Europe as a whole.

[1] According to the survey by the Ilko Kucheriv Democratic Initiatives Foundations conducted in May 2021.

[3]  According to the survey “Diplomacy 2022: Foreign policy expectations by Ukrainian society” conducted by the New Europe Center in November 2021.

[4] Survey by the Kyiv International Institute of Sociology, December 2021.

[5] According to the survey “Diplomacy 2022: Foreign policy expectations by Ukrainian society” conducted by the New Europe Center in November 2021.

[6] According to the survey by the Levada-Center, December 2021.

[7] Survey by the Kyiv International Institute of Sociology, December 2021.