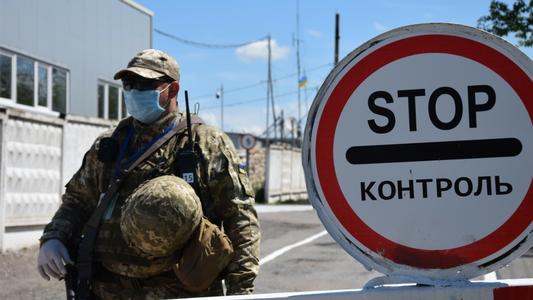 In a rare breakthrough, the Minsk negotiators brokered another ceasefire and agreed to open two new crossing points in the Luhansk region. But the existing entry-exit points with Ukraine proper remained largely closed as the coronavirus pandemic continued to affect the “People’s Republics”. The end of quarantine restrictions allowed the renewed busing of passport applicants and plebiscite voters to Russia, while international aid continued to arrive from Kyiv.

Crossing points in Zolote and Shchastia to open by November

The Trilateral Contact Group on 22 July agreed on a new ceasefire regime that includes “disciplinary actions” for violations and the restoration of the Joint Center Command Joint Centre for Control and Co-ordination (JCCC). According to the Organization for Security and Co-operation in Europe (OSCE), which brokered the truce, responses to ceasefire violations must be coordinated via the JCCC. Retaliatory fire is only permissible if that fails and the Contact Group is informed. The ceasefire is supposed to go into force on 27 July.

The JCCC is a military observer mission that was set up by Russia and Ukraine in 2014 to broker local ceasefires. Its role was greatly diminished after Russia withdrew its officers in December 2017. The OSCE said that the JCCC should work “in its current setting”, meaning that Ukrainian commanders will have to deal with separatist commanders directly. While the top commanders of the armed formations are widely believed to be Russian, this nevertheless amounts to another concession by Ukraine, which has long refused to recognize the separatist militias as independent and/or legitimate actors.

While official separatist media questioned Kyiv’s adherence to the decisions, President Volodymyr Zelenskiy said that Ukraine would always “respond strongly” to ceasefire violations – which in turn triggered an angry rebuke from the Donetsk Foeriegn “Ministry”. Outside observers pointed to the fact that past ceasefires often broke down after days or even hours.

On 8 July, the Contact Group, which consists of negotiators from Russia, Ukraine and the OSCE, while separatist emissaries are present, had agreed on opening two new crossing points in the Luhansk region, namely in Zolote and Shchastia. The two towns lie to the west of Stanytsia Luhanska, where a recently rebuilt footbridge currently serves as the single pedestrian-only entry-exit point for the whole region.

The necessary construction works will have to be completed within four months and the sides confirmed at the next talks that the crossings will be opened simultaneously no later than 10 November.

Plans to open another crossing point have stalled for years because the sides disagreed on the location. While Ukraine has insisted on an entry-exit point in Zolote, where it has a military advantage overlooking separatist positions from above, the “LNR” has insisted on opening in Shchastia – a potential advantage for separatists militias because the government-controlled town contains a massive power plant that provides much of the region with electricity.

Meanwhile, coronavirus infections continued to plague the “People’s Republics”. By 23 July, the “DNR” had reported 1,575 cases, including 93 deaths, while the LNR” reported 605 cases, including 15 deaths. While these numbers are smaller than what might have been expected in spring, when the separatists failed to introduce social distancing and the wearing of masks early on, they also show that the virus continues to spread. Thus, the “DNR” reported an average of roughly 20 new infections every day for the past four weeks. And the “LNR” said on 23 July that a spike of infections was localized in Lutuhyne, a town south of Luhansk.

The “People’s Republics” also reported significantly more infections than the government-controlled areas – despite having roughly similar-sized populations. Thus, as of 23 July the Donetsk region reported 818 cases and eleven deaths, while the Luhansk region reported just 119 – and no deaths.

In what might be a sign of discontent over the response to the pandemic, “DNR” leader Pushilin on 13 July suddenly sacked health “minister” Olga Dolgoshapko and replaced her with her predecessor Alexander Oprishchenko. No reason was given and in what looked like a sinecure, Dolgoshapko was simultaneously appointed Pushilin’s advisor.

The separatists largely dropped quarantine measures before staging victory parades on 24 June, in parallel with Moscow, which had moved the parade from 9 May because of the pandemic. However, many travel restrictions remained in place. While the “LNR” opened the footbridge in Stanytsia Luhanska on 18 June, the “DNR” opened its crossing points just on a few days and allowed entry only to for pre-registered residents, causing dozens of people to be stranded in no-man’s land.

The “DNR” reopened the border with Russia on 1 July, when separatist leader Pushilin decreed that people could travel to Russia and to the “LNR”. (However, according to the anonymous “Lugansk Inside” blogger, the border between both “Republics” remained closed.) Russia also waived mandatory COVID-19 tests for people arriving from the “People’s Republics” and the “LNR” on 23 July dropped the 14-day requirement for arrivals from Russia.

Bus rides for locals picking up their Russian passports in the neighbouring Rostov region were renewed by both “DNR” and “LNR” on 2 July, with both “republics” saying that some 1,000 people each would use them. The “DNR” Transport “Ministry” said on 15 July that almost 100,000 people had been bused since the programme began last year.

The number of Russian passports issued to inhabitants of both “Republics” is thought to be well above 220,000. “LNR” leader Pasechnik said on 12 June that more than 110,000 passports have been issued to his people, while the “DNR” said on 3 July that the number was above 112,000. Russian President Vladimir Putin decreed in 2019 that Ukrainians can get Russian citizenship fast-track if they hold “republican” passports, a decision that was strongly criticized by Ukraine and its western allies.

The separatists also campaigned for participation in the controversial Russian plebiscite on constitutional reform. However, while the “LNR” bused voters and more than 50 MPs to the neighbouring Rostov region, no such buses appeared in the “DNR”, whose election commission explicitly said in a guidance to voters that they would have to travel there themselves.

Meanwhile, the separatists did not publish results of the census that was held in both “Republics” in October. Both the “LNR” and the “DNR” statistics offices offered no information on their websites, despite earlier promises that the results would be published by 15 July. The “LNR” statistics office had said in November that results would be available no sooner than in the second quarter 2020.

The real population figures in the non-government-held areas is a matter of much speculation. Almost all observers agree that the official figures of currently 3.65 million (2.25 million in the “DNR” and 1.4 million in the “LNR”) are far too high because much of the population has left because of the war and the ensuing economic collapse. The failure to publish results caused speculation that the numbers might too shocking – the anonymous @fake_LNR Twitter user claimed that the “LNR” population has almost halved to 0.8 million.

A separatist media report at the time of the census found that 40 per cent of flats in Donetsk were empty (see Newsletter 66).

The economic crisis was discernible in frequent power failures. Thus, electricity in the entire “LNR” was cut on 23 July in what separatist authorities claimed was an “electronic glitch”. The outage, which lasted for about 30 minutes, also prompted fears that unstable electricity supply may become a bigger problem in winter.

Local bloggers pointed out that the big factories in the “People’s Republics” are operating without emergency electricity supply, meaning that any power outage results in a complete standstill. This may also partly explain a deadly accident in the huge Yenakiieve Metals Factory, where one worker was killed and another injured during restoration works on 21 July. The workers were apparently repairing damage from a fire when they received electrical shocks, according to a report by the official DAN news site.

Overall, there was little discernible economic movement in both “People’s Republics”. Miners and factory workers apparently continued to suffer wage arrears. According to a Ukrainian intelligence report that was published by the Zerkalo Nedeli weekly on 16 July, the “DNR” owes some 74 million roubles (900,000 euros) to some 3,000 workers of mines that have been earmarked for closure and put into a special holding company called “Donbassuglerestrukturizatsia”. The “LNR” has announced that it will close up to five unprofitable mines (see Newsletter 74).

Despite ongoing economic hardship, there were no new protests. In the “LNR”, where desperate miners went on strike in April and June to demand unpaid wages (see Newsletter 77), neither workers nor their family members made any public statements – probably a sign that security services, who detained two strike leaders for a fortnight, have successfully intimidated them.

“DNR” leader Denis Pushilin on 20 July reiterated that wages and pensions will rise as promised on 1 January 2021. Pushilin and his Luhansk colleague Leonid Pasechnik said in January that pensions and state employees’ wages would rise within two years to the level of the neighbouring Russian region of Rostov-on-Don. Average wages in Rostov are at almost 37,000 roubles, more than three times as high as in Donetsk (see our Annual Report, p 8). It is clear that such money will have to come from Russia, which in 2018 promised to raise wages in the “People’s Republics” (see Newsletter 46)

While no Russian aid convoys have arrived in Donetsk and Luhansk this year, the International Committee of the Red Cross (ICRC) and the United Nations were the only providers of outside assistance.

According to the Novosti Donbassa news site, this July Ukrainians border guards already recorded at least four convoys from Kyiv that entered non-government-controlled areas. The first, with 84 tons aid from the ICRC entered the “DNR” on 4 July. The second, with 75 tons (40 from the ICRC and 35 from UN agencies) on 9 July. A third convoy with 60 tons food was recorded on 15 July, in parallel with ICRC trucks that entered the “LNR” in Stanytsia Luhanska. A fourth convoy drove to Donetsk on July 23, bringing 120 tons in 7 lorries.