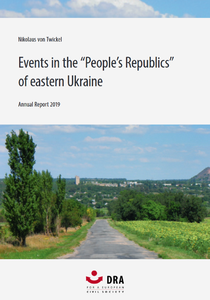 Events in the “People’s Republics” of eastern Ukraine. Annual Report 2019

The year 2019 brought big political change to Ukraine with the election of Volodymyr Zelenskiy as President, but the “People’s Republics” largely remained as they were in late 2018. While there was unprecedented progress in negotiations to implement the Minsk agreement in the second half of the year, separatist leaders stepped up their anti-Ukrainian rhetoric while paying lip service to the agreement, which stipulates re-integration into Ukraine. The issuing of Russian passports to the local population was the most visible example of this.

In a sign of political consolidation, some prominent separatists were allowed to return to public life after having been deposed and/or exiled in the past years. However, the practice of quietly removing separatist officials also continued.

The “People’s Republics” had little success with solving their greatest problem – to reboot the economy, which suffers heavily from the trade blockade with Ukraine proper. Efforts to attract foreign investment did not result in immediate improvement. Instead, there were persistent reports of wage arrears and production stops, while the separatists stepped up secrecy and released fewer economic data.

The human rights situation continued to be extremely disturbing with random detentions and long prison sentences being commonplace. This was especially poignant in the run-up to the prisoner exchange with Ukraine in December, when both “People’s Republics” handed down harsh sentences for espionage.

Lastly, the security situation improved due to the implementation of the disengagement agreement of 2016 and the civilian death toll went down significantly. However, combat deaths on the government side remained roughly as high as in the previous year.

In the recently published report summarises the trends and events in the “people’s republics” in eastern Ukraine in 2019.