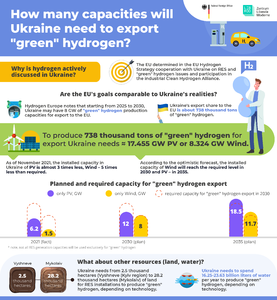 Export of “green” hydrogen from Ukraine to the EU: current capacity and future potential

According to the European Green Deal, hydrogen power must become the main component of the EU’s integrated power system during 2025-2030, and the capacity of electrolysis plants must increase to at least 40 GW 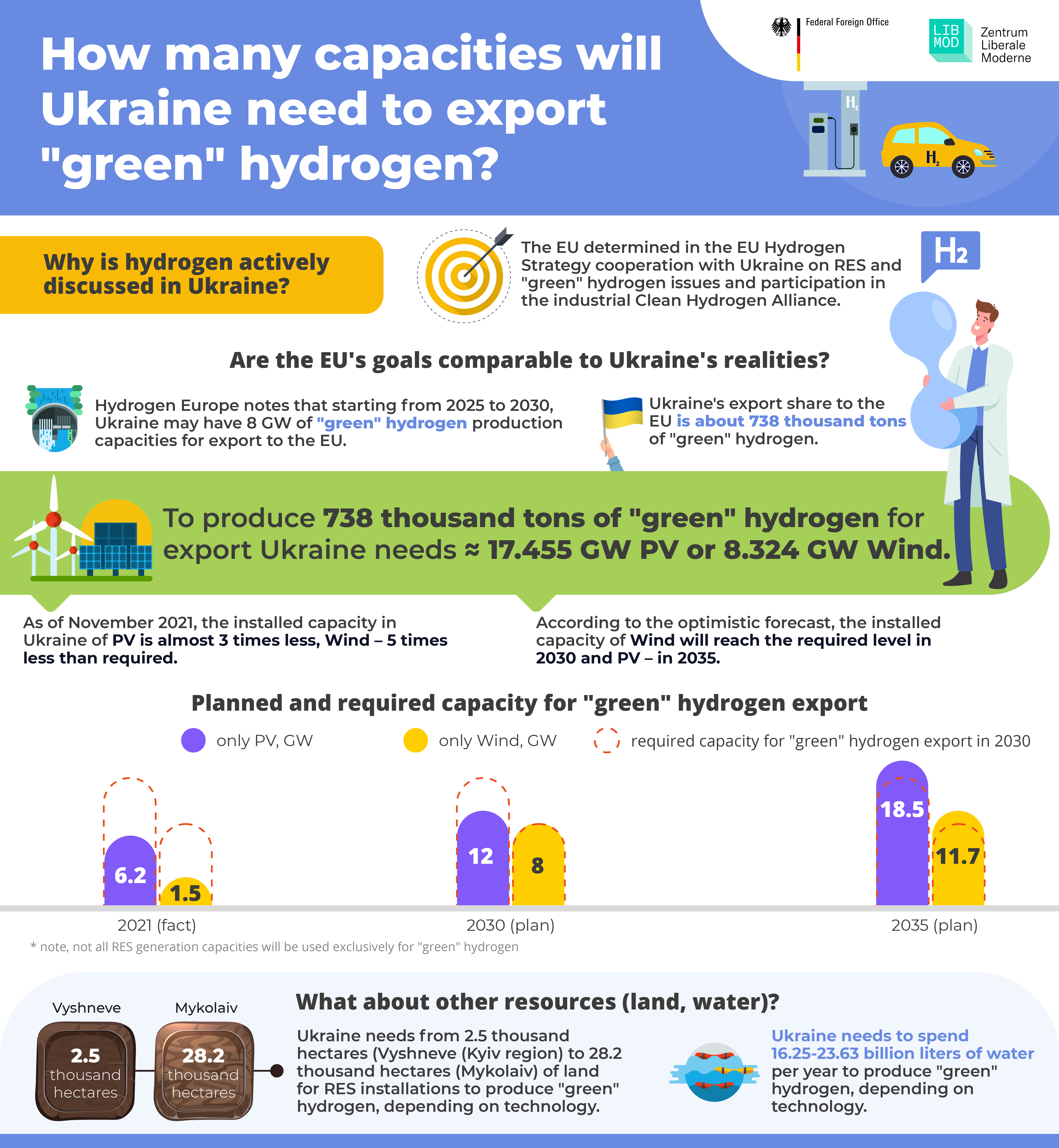 Relevance of the “hydrogen” issue

According to the European Green Deal, hydrogen power must become the main component of the EU’s integrated power system during 2025-2030, and the capacity of electrolysis plants must increase to at least 40 GW.

Ukraine is an important part of the EU’s future hydrogen power system. The Hydrogen Strategy envisages cooperation with Ukraine on the development of renewable energy sources and the production of “green” hydrogen, and involvement of Ukraine in the European Clean Hydrogen Alliance. Hydrogen Europe’s 2×40 GW initiative envisages construction of electrolysers with a rating of 9.8 GW in Ukraine to produce “green” hydrogen. Therefore, Ukraine may become an indispensable factor in achieving the ambitious goals of the European Green Deal.

Since the EU counts on Ukraine producing specifically “green” hydrogen, i.e. by electrolysis of water using “green” electricity, what capacity of solar and wind power plants (SPPs and WPPs) would be required to meet this demand?

However, since wind and solar power plants actually have a lower installed capacity utilization factor (ICUF) than hydroelectric or nuclear power plants, a much greater generation capacity would be required to achieve this goal. According to calculations by Siemens Gamesa experts, almost 13 000 GW of SPP capacity (with the assumed 24% ICUF for a solar power plant and the electrolyser’s effectiveness of close to 79%) or 6 200 GW of WPP capacity (with the assumed 50% ICUF for wind power generators) will be needed to produce 550 million tons of “green” hydrogen per year.

For comparison: as of November 2021, the installed capacity of SPPs in Ukraine was only 6.226 GW, or only a third of what is needed. For WPPs, the figure is 1.529 GW, which is one fifth the required capacity. According to Ukrenergo’s optimistic scenario, the capacity of solar and wind power plants may still reach the required levels by 2035 (18.5 GW for SPPs and 11.7 GW for WPPs). And overall, the potential of Ukraine’ solar and wind power production capacity is assessed to be at least at 537 GW (466 GW for WPPs and 71 GW for SPPs). Consequently, the country’s hydrogen production potential is also substantial, assessed at approximately 45.4 million tons.

At the same time, it is worth noting that not the entire renewable electricity generation capacity will be allocated solely for the production of “green” hydrogen, because these production operations would be the most economically viable for large renewable power installations.

The domestic demand for “green” hydrogen

Allowance should also be made for the potential increase of domestic demand for hydrogen due to the effect of the Carbon Border Adjustment Mechanism (СВАМ), particularly on part of the metallurgical and chemical industries to produce “green” steel, cast iron and ammonium fertilizers. The metallurgical industry faces the most acute need to decarbonize its production processes. 94% of Ukraine’s steel is produced by energy-intensive and out-dated methods that use coal, which can be replaced with “green” hydrogen, while almost 26% of the Ukrainian metallurgical sector’s production output is exported to the EU.

It is an open question whether such additional capacity could be created over a relatively short period (by 2030) in the Ukrainian realities, given that the renewables sector is in a state of crisis. Currently, Ukraine does not have an approved hydrogen power development strategy. The draft Roadmap for Development and Production of Hydrogen in Ukraine defines three phases for implementation of regulatory and economic objectives between 2021 and 2029. However, this plan does not envisage achieving 2×40 GW goals.

Land and water as important resources for production of “green” hydrogen

When planning production of “green” hydrogen, consideration must be given not only to installation of SPP and WPP generation capacity but also to land use. Depending on the location, the renewable electricity generation potential and technologies,  the land requirements are estimated at approximately 0.3 ha/MW for WPPs and 1.6 ha/MW for SPPs on average.

Therefore, between 2.5 thousand and 28.2 thousand hectares of land would have to be allocated in Ukraine for renewable power installations for producing “green” hydrogen. In comparison: on geographical scale, this area the size of Vyshneve (a town in the Kyiv Oblast) or of Mykolaiv, respectively.

There might be enough land to accommodate powerful renewable electricity production facilities, especially considering the capabilities of offshore WPPs, but this approach does not take into account certain specifics of every region and its renewable energy potential.

Besides the availability of land, the uninterruptible access to significant water resources is another important factor in operation of electrolysis plants for production of “green” hydrogen.

According to estimates, the total consumption of water to produce hydrogen from SPPs and WPPs may reach approximately 22-32 litres per kilogram of hydrogen on average.

Therefore, depending on technologies, Ukraine would require between 16.25 and 23.63 billion litres of water per year to produce “green” hydrogen.

At the same time, Ukraine has one of the lowest water availability indicators among European countries: approximately 1 thousand cubic metres per resident. Water availability differs significantly  between regions of Ukraine, and the scarcity of water is especially acute in southern regions.

Therefore, water resources are significantly limited in Ukraine. Even though the country has access to seawater, it would have to be desalinated. That, in turn, would only make hydrogen production projects more expensive.

The above calculations are only estimates, but it is already obvious that substantial resources would be needed not only to meet the domestic demand for “green” hydrogen and derivative products (ammonia, fertilizers) but also for exports. It means not only the land use but also investments in wind and solar power generation, and especially access to water resources, which in the conditions of adaptation to climate change could become even more scarce.