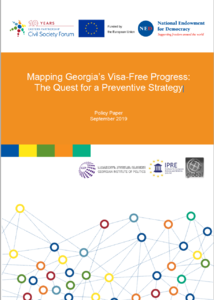 Mapping Georgia’s Visa-Free Progress: The Quest for a Preventive Strategy

This paper examines EU-Georgia post-visa free official discourse, facts and statistics against the negative benchmarks identified in the Visa Suspension Mechanism, which was introduced as a measure of self-defense by the European Union. The evaluation of relevant data confirms the legal basis for triggering the suspension mechanism, but the political sensitivity of the issue seems to be working in Georgia’s advantage. Still, the author argues that Georgia will not always enjoy political immunity to the substantially increased irregular migration and security risks for the EU. The European Union remains alarmed about the rising number of unfounded asylum seekers and undocumented migrants from Georgia, as well as the intensified criminal activities by Georgian organized groups. While these numbers are being misinterpreted and utilized by Europe’s pro-Russian forces to the detriment of Georgia’s European future, they are also real and rising. Therefore, the paper warns Georgia against complacency and denying the depth of the problem. The paper advises the government to be proactive in both its preventive and reactive strategies, fighting the number of violations and the propaganda at the same time. The author also places responsibility on the European Union and calls for an EU-wide reform of asylum policies and the border management system to address issues that are beyond Georgia’s control. The author compares the Visa Suspension Mechanism to the sword of Damocles hanging over Georgia’s European future until the European Travel Information and Authorization System provides relief to all sides concerned.