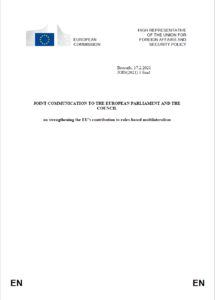 A renewed multilateralism fit for the 21st century: the EU's agenda

On February 17, the Commission and the High Representative put forward a new strategy to strengthen the EU's contribution to rules-based multilateralism. The Joint Communication lays out the EU's expectations of and ambitions for the multilateral system. Today's proposal suggests to make use of all tools at the EU's disposal, including its extensive political, diplomatic and financial support to promote global peace and security, defend human rights and international law, and to promote multilateral solutions to global challenges.

High Representative of the Union for Foreign and Security Policy/Vice-President for a Stronger Europe in the World, Josep Borrell, said: “Multilateralism matters because it works. But we cannot be ‘multilateralists' alone. At a time of growing scepticism, we must demonstrate the benefit and relevance of the multilateral system. We will build stronger, more diverse and inclusive partnerships to lead its modernisation and shape global responses to the challenges of the 21st century, some of which threaten the very existence of humanity.”

Commissioner for International Partnerships, Jutta Urpilainen, said: “The EU has been and will continue to be the best ally of multilateralism and its institutions. However, the more complex global environment calls us to be more united, coherent, focused, and better leverage our collective Team Europe strength. This new strategy spells out our ambition on inclusive multilateralism, our strong commitment to renew it and it will be underpinned by specific actions.”

Defining and defending EU priorities and values in the multilateral system

The challenges of the 21st century call for more, not less, multilateral governance and rules-based international cooperation. The EU has defined clear strategic priorities on issues that no country can face alone: peace and security, human rights and the rule of law, sustainable development, public health, or climate. Now, it needs to advance these priorities multilaterally in a strategic approach to ensure a safer world and a sustainable, inclusive global recovery.

The EU must step up its leadership and ‘deliver as one' to ‘succeed as one'. To this end, the EU will advance more efficient coordination mechanisms around joint priorities and making better use of its collective strength, including building on the Team Europe approach. Its democratic and unique regulatory strengths are assets to help build a better world, while its security and defence structures support global efforts to keep, sustain and build international peace and security.

To ensure the global multilateral system is ‘fit for purpose' to address today's challenges, the EU will continue to support the UN Secretary-General's reform efforts. It will promote the modernisation of key institutions such as the World Health Organisation and the World Trade Organisation. It will also spearhead the development of new global norms and the establishment of cooperation platforms in areas such as taxation, the digital sphere or Artificial Intelligence.

A stronger Europe through partnership

To change the multilateral landscape, we need a new generation of partnerships. The EU will build new alliances with third countries, reinforce cooperation with multilateral and regional organisations, as well as other stakeholders, especially those with whom it shares democratic values and, with others, it will seek a common ground issue by issue. It will support partner countries in engaging more effectively in the multilateral system and ensure systematic follow-up of bilateral commitments with partners to advance multilateral objectives. EU aims to build a more inclusive multilateralism. It is important to engage also with civil society as well as the private sector, social and other stakeholders.

The Commission and the High Representative invite the European Parliament and the Council to endorse the approach and to work together on these priorities.

To respond successfully to global crises, threats and challenges, the international community needs an efficient multilateral system, founded on universal rules and values. The UN remains at the core of the multilateral system. The EU and its Member States are the largest financial donors to the UN system, to the Bretton Woods institutions, and many other international fora. They provide almost one quarter of all financial contributions to the UN's funds and programmes, whilst the EU Member States also provide almost one fourth of the UN's regular budget. At the International Monetary Fund and the World Bank, EU Member States hold over a quarter of voting power close to a third of financial contributions come from the EU and its Member States.

Finally, the EU seeks closer cooperation with other regional and multinational groupings such as the African Union, the Organisation of the African, Caribbean and Pacific States, the Association of South-East Asian Nations or the Community of Latin American and Caribbean States to address common challenges and to work together at the international level.