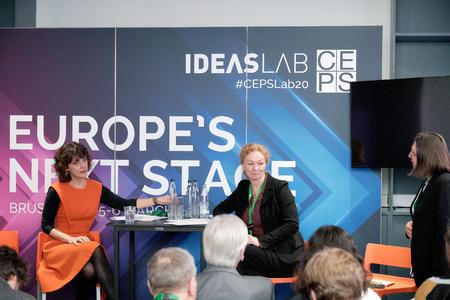 As associated countries of Georgia, Ukraine and Moldova ask for a more ambitious Eastern Partnership (EaP) policy, the debate continues about the next steps and available financial support for what is lauded as one of the EU’s most successful foreign policies. “The next decade should move from overcoming the distance to overcoming the differences; from creating linkages to creating a common space,” said Natalie Sabanadze, Georgian ambassador to the EU at the annual brainstorming event organised by the Centre for European Policy Studies (CEPS) think tank.

The Association Agreement “is the most tangible manifestation of Georgia’s political choice and a commitment to pursue it,” she added.

Calls for a more ambitious policy in the East with the three countries that have signed associations agreements with the EU and hope to one day enter the bloc  – Georgia, Ukraine and Moldova – have also been echoed by the European Parliament.

In a resolution passed last December, Euronest, the parliamentary assembly bringing together MEPs and politicians from the Eastern partnership countries, called for a “move forward in promoting a more ambitious use of differentiation, more for more and less for less principles” in the framework of ‘Trio Plus Strategy 2030.’

The idea was spearheaded by MEP Andrius Kubilius (EPP), hoping that the ‘Trio process’ could lead to the establishment of new institutions and policy instruments.

“We need to show a political perspective” to the Trio, Kubilius told EURACTIV in November.

EU officials and diplomats have been hesitant to endorse the move, fearing that privileging the associated states may strain relations with the other three EaP partner countries, which have no plans of joining the bloc.

Belarus and Armenia have joined the Russia-led Eurasian Economic Union, while Azerbaijan, rich in fossil fuels, seeks to maintain equal distance from the big powers.

“Although our natural trend … is to reward your best friends,” differentiation should not come at the expense of “inclusiveness,” Luc Devigne, the director for Eastern partnership at the EU’s diplomatic service told the European Parliament last November.

Academics say the two can go hand in hand. In a recently published policy paper, two CEPS researchers argued that the EaP policy has demonstrated that “deploying a host of relatively technical soft power instruments can combine to produce results of strategic significance.”

A multitude of tools can be more effective, in contrast “with some of the grand rhetoric of the ‘geopolitical Commission,'” the experts added, “which may raise expectations about an effective role in ‘high politics’ that the EU is less likely to meet.”

The Associated states step up

In December last year, at a ministerial meeting of the Organisation for Security and Co-operation in Europe, Georgia (OSCE), Ukraine and Moldova signed their first joint, political statement on EU integration.

The letter was followed by combined efforts of the associated countries to lobby the EU for necessary financial support at the margins of Munich Security Conference held last month.

In a joint letter the foreign affairs ministers of the three countries reminded the Commission about the “importance of ambitious support” for the Eastern Partnership in the next MFF.

The level of ambition of EaP will in large part be defined by available funding for the policy.

The EU’s new Neighbourhood, Development and International Cooperation Instrument (NDICI) will channel the biggest share of external action funds, but the amount of funding remains unclear as the haggling about the next seven-year budget continues.

The Commission proposed to set aside €79 billion for NDICI, with 22 billion strong ring-fenced budget for the Neighbourhood policy. This would represent a significant increase compared to an estimated €71.5 billion spent on external action during 2014-2020.

However, in the latest document prepared by Council President Charles Michel, the number was already cut by 4.4% to €75.5 billion, with an additional €500 million cut appearing in a Commission technical document, circulated among member states in what proved an insufficient attempt to break the impasse.

Yet, “sometimes when you ask for clarity the answer that you get is not the one you want,” said a participant at the CEPS event, warning against demanding a clear answer regarding the future of the EaP prematurely.

“Then it’s much better [to have] this ‘constructive ambiguity’ because the [Schrödinger’s] cat is both alive and dead at the same time,” they added. “And sometimes that’s more useful, because it gives you time. You can choose how you want to interpret the cat in the box for the time being.”