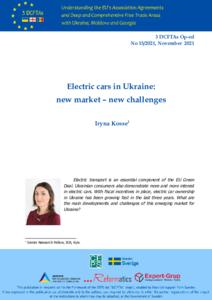 Electric transport is an essential component of the EU Green Deal. Ukrainian consumers also demonstrate more and more interest in electric cars. With fiscal incentives in place, electric car ownership in Ukraine has been growing fast in the last three years. What are the main developments and challenges of this emerging market for Ukraine?

As of 1 September 2021, there were 30 062 electric cars in Ukraine, featuring a 20% increase over the last half-year. Apart from environmental considerations, electric cars' tax benefits are likely driving this trend, given exemptions from customs duty and VAT. The buyer only pays an excise tax of EUR 1 per 1KW*h of battery capacity. Furthermore, companies that exclusively produce electric engines, batteries, chargers, electric and gas vehicles are exempt from the profits tax. Also, driving 100 km in an electric car would cost around UAH 33, which is considerably cheaper than driving cars with internal combustion engines (ICE).

However, the share of electric cars remains small. For comparison, there are 14 million ICE cars in Ukraine.

All the electric cars sold in Ukraine are imported. The leading electric cars brands offered in the country are Audi, BMW, Hyundai, JAC, Jaguar, Mercedes-Benz, Nissan, Porsche, and Renault.  Tesla is not officially sold in Ukraine since it does not have a Ukrainian sales outlet. With time, Ukrainian drivers tend to switch to cars with higher battery capacity. For example, the share of Nissan Leaf for the last three years decreased from 85% to 60%.

The main challenges in driving an electric car are limited mileage for one charge and long charging periods. That creates a need for well-developed charging infrastructure.        In Ukraine, only big cities have good infrastructure for electric cars. In regions, customers note difficulties with finding charging stations.

As of August 2021, there were 11.5 thousand charging points (connections) for electric cars in Ukraine, a significant improvement from just 35 chargers in 2014. By the number of chargers, Ukraine surpasses Spain and Belgium. However, the share of high-power chargers (50 KW and higher) is still just 30%. Two years ago, the absence of fast and super-fast charging stations on the highways was among the principal limits for long-distance travel by electric cars. Now, this constraint is partially lifted, at least on the Kyiv-Lviv, Kyiv-Odesa, Kyiv-Poltava highways.

However, the charging infrastructure is built erratically and without standardization. Most charging stations are installed by individuals who buy them from different manufacturers, of variable quality, with the support of varying information protocols. Some charging stations are installed by owners of restaurants, hotels, parking lots, supermarkets, and entrepreneurs, and are registered as objects of street vending, transformer boxes, or even advertisement objects.

Not only charging the battery requires some planning, but electric car maintenance can be very costly. For example, insurance payments for electric vehicles in Germany are 10% higher than for ICE cars, and repairing damaged electric cars is 30% more costly, on average. The main reason is the expensive battery which can cost up to EUR 20 000. The second reason is the expensive electric wires often damaged by mice and rats. These wires can cost on average EUR 7 000.

Electric car batteries pose additional problems compared to ICE (space and weight). They are made up of several hundred individual lithium-ion cells, complicating the task of dismantling. They contain hazardous materials and can explode if disassembled incorrectly. Only 5% of lithium-ion batteries are recycled in the world nowadays.

Suppliers are taking steps to ease this problem. Nissan, for example, is now reusing old batteries from its Leaf cars in the automated guided vehicles that deliver parts to workers in its factories. Volkswagen is doing the same but has also opened its first recycling plant in Salzgitter, Germany, and plans to recycle up to 3,600 battery systems per year during the pilot phase. Likewise, Renault is recycling all its electric car batteries, although that only amounts to a couple of hundred a year.

By 2030, an estimated 12 million tons of lithium-ion batteries are expected to retire worldwide.It is said that the electric cars put on the road in 2019 will eventually generate 500 000 metric tons of battery waste globally. To prevent turning the electric cars into a mountain of electronic waste, the EU has proposed changes to battery regulations, with target rates of 70% for the collection of lithium-ion batteries, recovery rates of 95% for cobalt, copper, lead, and nickel, and 70% for lithium, and mandatory minimum levels of recycled content in new batteries by 2030.

However, costly compliance may induce some sellers of second–hand cars to sell them outside the EU. It is reported that nearly a fifth of the roughly 400 000 Nissan Leaf electric cars produced by the end of 2018 is now registered in Ukraine, Russia, Jordan, New Zealand, and Sri Lanka — places where the regulations for the disposal of batteries are not so onerous.

Therefore, the Ukrainian government should not only encourage switching to more environmentally-friendly electric vehicles but also start planning what to do with retired lithium-ion batteries. Furthermore, since this is an issue also for the EU, Ukraine should best align its regulations with those of the EU.