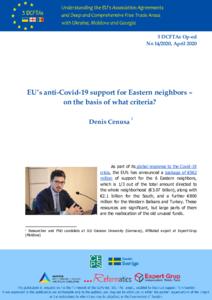 EU’s anti-Covid-19 support for Eastern neighbors – on the basis of what criteria?

As part of its global response to the Covid-19 crisis, the EU’s has announced a package of €962 million of support for the 6 Eastern neighbors, which is 1/3 out of the total amount directed to the whole neighborhood (€3.07 billion), along with €2.1 billion for the South, and a further €800 million for the Western Balkans and Turkey. These resources are significant, but large parts of them are the reallocation of the old unused funds.

In their new use the Covid-19 response funds should be “accelerated” and “non-reimbursable”, according to the EU Ambassador to Georgia, Carl Hartzell. The funds are intended both to boost the capabilities of the national health systems, and address the huge social-economic damages faced by SMEs.

The daily updated figures show that the Covid-19 virus is hitting harder some of Europe’s Eastern neighbors more than the others. The Table below illustrates that Ukraine, Belarus and Moldova are the most affected, followed by Armenia and Azerbaijan, with Georgia showing the highest resistance. However, the distribution of the EU’s assistance does not visibly correspond  to the impact of the virus on public health.

Table: The distribution of the EU’s anti-Covid response funds to the 6 EaP countries, 13 April 2020

Source: Compiled by the author, europe.eu, worldometers.info, https://ec.europa.eu/neighbourhood-enlargement/sites/near/files/coronavirus_support_eap.pdf
* The unofficial census conducted by the Honcharuk’s government in 2020 shows 37 million.

The EU has not published any explanation about the criteria used to allocate the Covid-19 response funds. Our understanding is that a major factor has been the extent to which existing aid commitments could for practical reasons be re-purposed for Covid-19. In addition the aid is intended to address economic and social impacts of the crisis, which has been hitting all countries obliged to lockdown their populations and shut down large parts of the economy. These economic impacts are more evenly distributed on a per capita basis than Covid-19 infection and death rates. But this is not evident in the distribution of Covid-19 aid.

The Moldovan Ministry of Foreign Affairs and European Integration explained that the country-based Covid-response funds complement the already allocated regional financial support of €140 million, announced on March 30, which include funds for the civil society (€11,3 million), World Health Organization (€30 million), and for economic recovery (€100 million). The disproportionate allocations of the country-based assistance has not led to criticism by any beneficiary country, so far as we know. The Ukrainian Prime Minister Denys Shmyhal expressed appreciation for the right timing of the assistance. A positive reaction followed from the Moldovan Minister of Foreign Affairs Oleg Țulea.

Several factors may have determined the structure of the EU’s support for the Eastern neighbors.

First, structurally the relations differ from one case to another. Georgia, Moldova and Ukraine access more funds due to their Association agreements. Armenia is also benefiting from considerable assistance, though to a lesser degree, as part of the engagement in the Enhanced and Comprehensive Partnership. Normally assistance to Belarus and Azerbaijan reflects the least interconnected political and economic relations that these two countries have with the EU amongst the Eastern Partnership countries. However, this does not explain why Armenia receives more than Moldova (€91 million vs. €87 million), or why Georgia receives almost as much as Ukraine.

Secondly, each of the 6 countries has existing financial engagements with the EU. As mentioned the EU is providing for the re-purposing of money earmarked in the past. However the Commission has not explained how far this factor, through the amounts of existing commitments and the extent to which they could for practical reasons be re-purposed, is responsible for the allocations. There may also have been differences in the speed with which the EaP states have been able to organize the re-purposing of the aid. Besides, it is unclear whether the macro-financial assistance, usually composed of a combination of unevenly proportionated loans and grants, will be turned into anti-Covid-19 assistance as well, and if so for which EaP states.

Thirdly, is the question whether political considerations entered into the equation. Given the overwhelmingly humanitarian nature of the Covid-19 crisis, this should not be. However, there is a  clear backing on rule of law elements attached to EU’s assistance as stipulated in the EU’s “Global Response to Covid-19”. We have no information whether this has been the case. But we have observed in the case of Moldova that the local elites are politicizing the discrepancy of the EU’s financial aid.

In the interests of transparency, and in order to have a full picture, the EU should set out clearly the criteria applied in deciding the distribution of Covid-19 assistance.