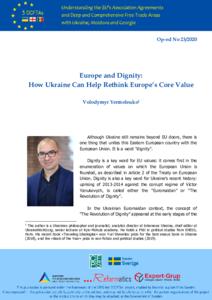 Although Ukraine still remains beyond EU doors, there is one thing that unites this Eastern European country with the European Union. It is a word “dignity”.

Dignity is a key word for EU values: it comes first in the enumeration of values on which the European Union is founded, as described in Article 2 of the Treaty on European Union. Dignity is also a key word for Ukraine’s recent history: uprising of 2013-2014 against the corrupt regime of Victor Yanukovych, is called either the “Euromaidan” or “The Revolution of Dignity”.