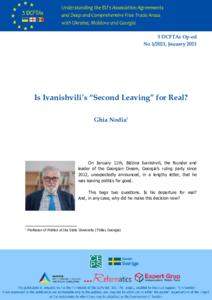 Is Ivanishvili’s “Second Leaving” for Real?

On January 11th, Bidzina Ivanishvili, the founder and leader of the Georgian Dream, Georgia’s ruling party since 2012, unexpectedly announced, in a lengthy letter, that he was leaving politics for good.

This begs two questions. Is his departure for real?  And, in any case, why did he make this decision now?

We have already seen this before. In October 2013, having served for one year in the position of the prime minister, Ivanishvili resigned and said he would now become a private citizen without any political role, ruling out any chance of coming back in the future. He also said he would become part of civil society and criticize the GD government from that position.

Then his departure was not as unexpected as it is now. When Ivanishvili announced his intention to confront then-president Mikheil Saakashvili in October 2011, he said that after winning the 2012 parliamentary elections he would only serve as the prime minister for two years and return to his normal life afterward. The idea was that by defeating Saakashvili’s allegedly autocratic rule and swiftly stabilizing democratic institutions he would exhaust his mission. Later, he decided that he completed his task even sooner than expected.

The following years proved his pledge wrong on several accounts. He maintained effective control over the GD government; he was always apologetic of the government in his public statements; and in April 2018, he formally returned to politics, becoming the chairman of the GD.

While the second and the third points are obvious, Ivanishvili and GD leaders never acknowledged that he remained in the driver’s seat while being a “private citizen”. This contention may look speculative, but there is overwhelming evidence in its favor. Lots of GD defectors or expellees later spoke of Ivanishvili as a principal decision-maker as a matter of fact. For instance, David Usupashvili, the chairman of the Georgian Parliament in 2012-2016, recounted how Ivanishvili personally proposed him to become a prime minister under certain conditions (they did not agree). There were reports of the US ambassador or President Ilham Aliyev of Azerbaijan visiting the “private citizen” – they wanted to speak to the real boss. “Informal governance” became the key-word for describing the mode of governance in Georgia by most analysts, domestic or international. According to polls, that’s what most Georgians believed too.

What we cannot say is how much Ivanishvili was involved in day-to-day governance. Supposedly, he approached the issue as a businessman: he acquired a controlling stake in a new company, the Georgian state; initially, he was closely involved in its governance, but eventually entrusted this task to his hand-picked managers (whom he occasionally replaced). But he could also direct their actions if he chose to.

Naturally, it is widely presumed that after the “second leaving” Ivanishvili will return to the same mode of operation. Of course, we cannot rule out that it will be different this time. Ivanishvili reiterated that he will not get involved in any decision making, and will not take the calls of GD leaders if they are political. But given the previous experience, few people believe this.

In a hypothetical scenario of his genuine departure, this will become a big problem. People who voted for GD voted primarily for Ivanishvili; GD, as it exists today, revolves around his personality. Without him, the party will have to fundamentally redefine itself; that would hardly happen without conflicts.

There is another important question: if he is to be in charge anyway, what is the point of his resignations and returns?

As on many things related to Ivanishvili, we are doomed to speculate. People on the opposition side claim that he understands that his government is in trouble and flees to avoid responsibility. Mikheil Saakashvili, the former president, even alleged that Ivanishvili financed the campaign of Donald Trump and is now scared of the incoming American administration.

I am afraid that the opposition is deceiving itself and its constituency. Its decision to boycott Parliament immersed Georgia into a protracted crisis of democratic governance. However, this does not mean that Ivanishvili and GD leaders genuinely perceive the situation as critical for them. I have a contrary assumption: Ivanishvili decided to resign from his formal position again because he is confident about the stability of the GD rule.

Apparently, for whatever reason, his first preference has always been the mode of shadow control that he exercised in 2013-18. This may give him greater freedom of maneuver and less formal responsibility. If this is so, he is going back to normal now. It was his temporary return to a formal position that has to be explained.

In April 2018, when he acquired the position of the GD chairman, the party was in turmoil: internal fights between different factions came into the open and some members dared to publicly criticize his appointees, which he rightly considered a challenge to his authority. Moreover, the ratings of the government were going down with just half a year to go before the presidential elections. That might have convinced Ivanishvili that he needed a more direct and visible role.

As compared to that, now things look much better – at least to him. The party is cleansed of too independent-minded people; for instance, nobody would dare to question his choice of an extremely unpopular Irakli Kobakhidze becoming the new party chairman. The elections are won, and the opposition looks weak and unsure of what to do next. There is no obvious challenge to his personal authority within the party, neither to the GD rule in the country.

Contrary to a wide-spread view, I don’t think Ivanishvili worries much about the opposition boycott of parliament. The West clearly disapproved of the boycott, so Ivanishvili feels he won there too. Formally, one opposition party has now entered Parliament: this is a small group who call themselves “European socialists” and had been hidden in the list of Alliance of Patriots of Georgia, an ultra-nationalist anti-western party (the latter’s leaders joined the policy of Parliament boycott). A one or two other tiny parties may still rethink. So, the appearance of a multi-party democracy will be kept and that may be sufficient – at least, for Ivanishvili’s taste.

Even if I am right in my interpretation of Ivanishvili’s motives, however, it does not mean that his take of the situation is necessarily right. When he resigned for the first time, things also looked good for him and his party: but then problems started to accumulate eventually pushing him to change his mind. The situation may be relatively calm at the moment, but there are lots of inherent tensions and nobody can predict which way things go.