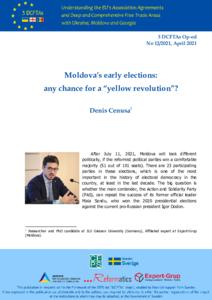 Moldova’s early elections: any chance for a “yellow revolution”?

After July 11, 2021, Moldova will look different politically, if the reformist political parties win a comfortable majority (51 out of 101 seats). There are 23 participating parties in these elections, which is one of the most important in the history of electoral democracy in the country, at least in the last decade. The big question is whether the main contender, the Action and Solidarity Party (PAS), can repeat the success of its former official leader Maia Sandu, who won the 2020 presidential elections against the current pro-Russian president Igor Dodon.

Not only is the victory of the PAS important, but also whether it will be able to dominate in the new parliament. Other pro-reform parties are too weak to exceed the 5% threshold. Meanwhile, the Bloc of Communists and Socialists, headed by two former presidents Vladimir Voronin (2001-09) and Igor Dodon (2016-20), dominate the preferences of voters on the left side of the political spectrum.

Without strong legislative support, President Sandu has little or no opportunity to renew her ambitious judicial and anti-corruption reforms. Throughout the country and abroad, especially in countries like Italy, where there is a large community of the Moldovan diaspora (Promolex, June 2021), Sandu has asked citizens to come forward and vote for "honest people" like her. It is an indirect reference to her party PAS , which seeks to gain from the image of the Presidential office, efficiently managed by Maia Sandu since the end of 2020. The diaspora receives special attention. In the 2020 presidential elections, some 240,000 of the 260,000 diaspora voters supported Maia Sandu, the majority of them residing in the West (IPN, June 2021). After several revisions, the electoral agency has approved 150 voting tables abroad, which is 40 units, less than the pro-Western political parties insisted.

A “yellow revolution” or not?

National polls agree with the fact that PAS is the clear favourite in the early elections. If these predictions come true, it will be quite exceptional for Moldovan democracy. The PAS is not only a very young party (created in 2016), but also has no support of oligarchic groups. However, there are too many unknowns to be sure that Moldovan politics are going to be painted yellow, the political colour of the PAS.

President Sandu's party needs and wants a majority of seats in the parliament. Otherwise, they will have to find a partner to form the governing coalition. According to polls, the left-wing bloc of the two former presidents, Voronin and Dodon, will score well. However, unlike the PAS that has higher chances to obtain a majority, the communist-socialist tandem would surely need the help of a junior partner to create a legislative majority.

With some degree of caution, according to Moldovan polls, it is safe to say that only one or two other parties, the “Shor” Party and the Renato Usatii Bloc, have the electoral potential to enter the new parliament.

The first is named after the infamous fugitive Ilan Shor, who coordinates the party from Israel, where he is hiding from Moldovan justice. In particular, Shor was instrumental in executing the bank fraud of 2012-2014. The courts have been fighting for many years, but without success, to make a final decision in Shor's case to reconfirm the sentence to 7 and a half years in prison, handed down in 2017. His criminal record, which also includes collaboration with the fugitive oligarch Vladimir Plahotniuc (NewEasternEurope, November 2019) did not damage his electoral base. The "Shor" Party relies on very vulnerable social categories of the elderly, rural and poorer population, who in exchange for political association obtain access to cheap food sold in specialized "social shops" funded by the party from unknown sources.

Renato Usatii is the leader of “Our Party” and the current mayor of the city of Balti, the second economic power house in the country. He returned to Moldova in 2019 in the wake of the collapse of the oligarchic regime. Before that, he ran in the 2015 local elections and won the mayoralty of Balti. The 2021 snap elections are not the first time that Usatii tries to enter parliament. In 2014, on suspicion of external funding (from Russia), his party was disqualified. He is controversial mainly because of the fortune he earned in Russia, in obscure ways. In the past, Usatii competed with Dodon for political access to the Kremlin. Instead of gaining a direct line to Vladimir Putin, Usatii became the target of Russian prosecutors. Despite all the suspicions related to his activities, neither the PAS nor President Sandu, who received the support of Usatii in the runoff of the 2020 presidential elections, exclude post-election cooperation with him. On the other hand, an alliance between Usatii and Dodon is less likely given the enduring hatred they have both cultivated against each other. The electoral potential of Usatii must be carefully considered. He has spent generously on his electoral campaign (almost 9 million MDL or about 400,000 euros), which is 2.5 times more than the PAS and 4 times more than the communist-socialist bloc. His populism has been effectively winning Moldovan voters since 2014. Furthermore, he was the third most voted candidate after Maia Sandu and Igor Dodon in the 2020 presidential elections (227,939 votes). Consequently, both the PAS and the communist-socialist bloc might have to start thinking about how to eventually approach Usatii.

The end result of these elections is whether Moldova breaks the vicious cycles of prolonged resistance to structural reforms, or perpetuates stagnation. Along these lines, one can distinguish the electoral offers of the main political parties that are expected to enter parliament: PAS, communist-socialist bloc, “Shor” Party and Renato Usatii's bloc.

The PAS has replicated the reform agenda proposed by Maia Sandu during the 2020 presidential elections, which accentuates judicial and anti-corruption reform, along with other socioeconomic issues. The party refers to the aid of the EU to finance dozens of projects in the field of transport, energy or rural development. PAS explicitly argues that the optimal strategic orientation for the country is European integration.

The Bloc of Communists and Socialists openly chooses to build a strategic dialogue with Russia, which is not opposed to maintaining relations with the EU as they are. Even if the left bloc does not reject the EU, it wrongly hints that the Association Agreement creates a future prospect for the sale of land to foreigners. Along with that, the communist-socialist tandem speculates that pro-EU forces in power will jeopardize traditional family values. In the bloc’s electoral program , the prioritization of the rural area and agriculture stands out, expressing the aim to capture the votes of the lower-income population of the cities and the categories related to the farmer in the villages.

The other two parties that could also enter parliament, the "Shor" Party and the Renato Usatii Bloc, are suggesting populist measures. At the same time, these parties also attempt to imitate the PAS and the communist-socialist bloc respectively on aspects related to anti-corruption, industrial modernization or foreign policy. The former suggests an industrialization of the economy through the construction of new state enterprises across the country. Such a measure requires massive investments that the state is not able to attract. Despite Ilan Shor’s participation in the fraudulent schemes in the banking system and the lack of a final incriminating decision by the court, the “Shor” Party dedicates some of its electoral promises to fighting of corruption in the judiciary. Foreign policy is lacking in the Party’s electoral program, which means that it does not seek to revise the existing external balancing of the country.

On the other hand, Renato Usatii proposes to cancel the debts on inefficient credits through a plebiscite or to use the reserves of the national bank to subsidize the economy. His plan to modernize the country suffers from opacity in terms of financial costs and the sector reforms that he must imply. In general, Usatii has maintained the electoral proposal launched last year during the presidential elections. Some of his electoral offers sound like the radical version of what came out of the PAS on the fight against corruption and oligarchic elements. The liquidation of the existing Anti-Corruption Center and the reform of the Intelligence Services are combined with the strong criminalization of corruption crimes, the anti-corruption purge of the system and the cancellation of the immunity of parliamentarians. In foreign policy, Renato Usatii resembles the communist-socialist bloc that also advocates a balanced pro-Moldovan foreign policy, which even includes a friendly stance towards China.

Moldova is on the brink of major political changes if the probable scenario becomes a reality. The July 11 vote will bring more reformist minds to parliament than at any other time in the country's electoral history. However it is still likely that the parliament will return to a 3 or 4 party composition that was common in the 1994-2014 period. As much as these elections may unleash a momentum of qualitative change, they could also restore periodical pre-electoral political crises. President Sandu may again refuse to appoint a prime minister who is not from her political party (PAS), which could be a plausible scenario if the PAS does not obtain a comfortable majority or does not find a reliable political partner in the parliament.

Finally, to break the cycle of political crises and push through reforms, the PAS will need as many pro-EU votes as possible to defeat the communist-socialist bloc. One way to do this is if the minor pro-EU parties abandon their candidacies and mobilize their voters to support only the PAS. This scenario could reduce the uncertainty about the future of anti-corruption reforms in Moldova and the tangible impact of European integration.