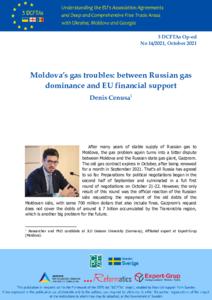 After many years of stable supply of Russian gas to Moldova, the gas problem again turns into a bitter dispute between Moldova and the Russian state gas giant, Gazprom. The old gas contract expires in October, after being renewed for a month in September 2021. That's all Russia has agreed to so far. Preparations for political negotiations began in the second half of September and culminated in a full first round of negotiations on October 21-22. However, the only result of this round was the official reaction of the Russian side requesting the repayment of the old debts of the Moldovan side, with some 700 million dollars that also include fines. Gazprom's request does not cover the debts of around $ 7 billion accumulated by the Transnistria region, which is another big problem for the future.

In negotiations with the Russian side, the Moldovan side has openly complained that it cannot accept two conditions. First, it stated that it is not acceptable to pay the debts in full and in three years, as allegedly indicated by Moscow. Second, the price that Russia is demanding is unbearable, without specifying what it should be. At the same time, unofficial Moldovan sources leaked to the media the fact that Russia would request the cancellation of the "unbundling" in the gas sector, which is ongoing, but at very low speed. Another political request that Russia is supposedly demanding is the withdrawal of the DCFTA with the EU. The Financial Times even reported that Moscow wants weaker ties with the EU in exchange for a new gas contract. None of this information can be verified, while Moldovan officials do not want to confirm that such requests coming from Russia. The only two things the Moldovan government openly invokes are price and debt, leaving the rest sounding like a speculative matter, which might still complicate negotiations for a gas deal.

There is no easy solution, but a solution is urgent

On October 27, before the EU-Moldova Association Council in Brussels, the EU announced the disbursement of 60 million euros financial assistance . The Moldovan government announced that this money represents a grant offered in solidarity to handle the energy crisis. This support could be very useful to balance the budget that will have to be reviewed to pay compensation to households or subsidize the costs for the increased gas price. Although the financial aid from the EU is laudable and shows that Chisinau's pro-reform government has reliable partners in Brussels, it is unlikely to be enough to help Moldova weather the cold winter.

Supplies through the interconnection with Romania, and imports from Poland and Ukraine are essential to maintain pressure in the gas pipeline network. However, these alternatives are not sufficiently substantial or robust to abandon negotiations with Russia on a new long-term contract. In fact, Moldovan officials explain that the search for alternative sources of supply has the role of improving their negotiating position with Russia. So far, this has not resulted in any concessions from Gazprom, which on the contrary shows no change in its position.

To buy more time, Moldovan negotiators have no alternative but to try to extend the current Gazprom contract until the end of November as an urgent minimum goal. But if the debts are not paid by early December, Russia could suspend the bilateral contract. This is however undesirable for Moscow because it might also affect the Transnistrian region, which is completely dependent on gas supplies from Russia, with lucrative businesses in the field of electricity and metal processing. There is no easy solution. The negative scenario would see a failure to resolve the gas disputes provoking a socio-economic crisis in Moldova and serious tensions within the separatist region controlled by Russia. The optimistic scenario is to extend the gas contract with a formula that benefits both Moldova and Russia, avoiding a deepening of the gas crisis.