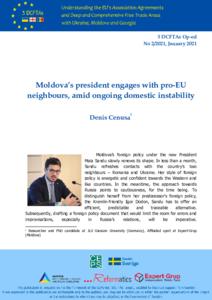 Moldova’s foreign policy under the new President Maia Sandu slowly renews its shape. In less than a month, Sandu refreshes contacts with the country’s two neighbours – Romania and Ukraine. Her style of foreign policy is energetic and confident towards the Western and like countries. In the meantime, the approach towards Russia points to cautiousness, for the time being. To distinguish herself from her predecessor's foreign policy, the Kremlin-friendly Igor Dodon, Sandu has to offer an efficient, predictable and traceable alternative. Subsequently, drafting a foreign policy document that would limit the room for errors and improvisations, especially in Russia's relations, will be imperative. The Russian topic is highly complex and ties to security aspects around the Transnistrian conflict. Nevertheless, even in the absence of a comprehensive foreign policy document, President Sandu’s geopolitical preferences have a definite contour around  European integration and strong partnerships with the two direct neighbours.

Strengthening ties with the neighbours – Romania and Ukraine

For any small-sized country like Moldova, which has geographical and infrastructural constraints to access international trade routes, a constructive dialogue with the neighbours is essential. The geopolitical-ideological affinities count as much. Having the neighbours – Romania and Ukraine – that either belong to or aim to join the EU is an advantage. That was of less importance for the previous president. Sandu’s office is, on the contrary, fully aware of the benefits that can come from this pro-EU neighbourhood.

Shortly after her inauguration, on 24 December 2020, Maia Sandu welcomed the Romanian President in Moldova's capital Chisinau. There was a deliberate attempt from both sides to portray a qualitative change in bilateral relations. Romania’s leadership wants to seize the momentum of the political shifts in Moldova and boost support for the pro-EU politicians. It assured Sandu’s presidency with help, including the offer of vaccine donation at an unspecified time (about 200,000 units). Romania thus improves stability at its borders and creates more grounds for enhancing its soft power. Without external support, decreasing the relevancy of voting for the pro-Russian forces is hardly manageable. As in Romania's case, the affiliation of Sandu’s party with the European People’s Party will facilitate top-level political contacts with other European leaders (and at least in the case of Germany until its 2021 federal elections).

Another immediate goal of President Sandu has been to establish direct contacts with the President of Ukraine. A few days after the Orthodox Christmas, the president, with a group of her advisers and staff, drove to Kyiv (402 km). Travelling on a low budget in two mini-buses to meet with Volodymyr Zelensky had multiple political symbolisms, even if the decision was not entirely convincing from a security point of view. However, Sandu wanted to show that saving public money during the pandemic is a priority even in her foreign policy actions. To some extent, she projected modesty, again contrasting with the former president's luxury expense style. Thus, she aims at preserving the public perception of her being "one of them (ordinary citizens)". The Sandu-Zelensky joint declaration highlighted trust and many areas of common interests. Both of them stated that they pursue EU membership for their countries. They signed a somewhat schematic memorandum that listed the ongoing bilateral cooperation on border management, transit, environment and energy, where more efficient cooperation is needed. The two leaders resolved to improve the infrastructures connecting Chisinau and Kyiv. There were no public statements on the Transnistrian conflict. The Sandu-Zelensky declaration institutes a “Presidential Council”, as a platform of bilateral contacts. The visit of Sandu was also satisfactory for Zelensky, because she confirmed Moldova’s recognition of Crimea as Ukrainian territory, questioned in the past by Igor Dodon.

Better on outside than from inside

Unlike this positive trend in the external field, the situation on the inside is bleak. The provisional government has weak competences that envisage maintaining the current state of public affairs. President Sandu has turned the acting foreign minister, Aurel Ciocoi, into the interim prime minister. The constitutional provisions require the President to appoint the prime-minister candidate after consulting the parliamentary factions (Art. 98). The consultations occurred on 28 December 2020 and many political voices demand Sandu to present the candidate. However, the law does not bind the President to a specific deadline, and President Sandu is not rushing to do that. She intends to trigger early elections as soon as possible, while appointment of a prime minister might delay that. She addressed to the Constitutional Court a question about an entirely new way of dismissing the parliament - through “self-dissolution”. The Court should decide whether the existing mechanisms can serve to dampen political instability without creating legal precedents, with unpredictable future risks. In the meantime, Sandu tries to increase the outgoing government's powers through another interpretation from the constitutional judges, notably to entitle the interim Prime Minister to fire and hire new officials and sign international agreements. With their competences thus renewed, the outgoing government seems willing to work cooperatively in tandem with Sandu.

President Sandu thus needs to buy time until the Constitutional Court deliberates whether it allows the “self-dissolution” of the parliament or not. Without a more functional government, Sandu will need to follow the game's existing rules, which may push the early elections back beyond spring 2021. Moreover, lacking a government that can sign international agreements, Sandu cannot seal effectively deals on financial support from the EU and other external partners. She would benefit considerably if the Constitutional Court supports her suggestions – on “self-dissolution” of the parliament and the renewed competences for the outgoing government – before her next foreign trip to Brussels, on 18 January. In the absence of these arrangements, Sandu will look much weaker in front of her European interlocutors, aware that Moldova is silently going through a political crisis.