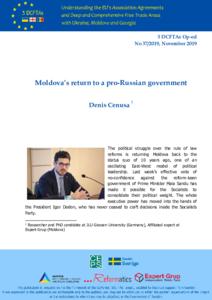 Moldova’s return to a pro-Russian government

The political struggle over the rule of law reforms is returning Moldova back to the status quo of 10 years ago, one of an oscillating East-West model of political leadership. Last week’s effective vote of no-confidence against the reform-keen government of Prime Minister Maia Sandu has made it possible for the Socialists to consolidate their political weight. The whole executive power has moved into the hands of the President Igor Dodon, who has never ceased to craft decisions inside the Socialists Party.

Several factors crucially contributed to the fall of the government that had been almost entirely run by the ACUM bloc.