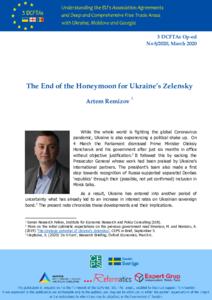 The end of the honeymoon for Ukraine’s Zelensky

While the whole world is fighting the global Coronavirus pandemic, Ukraine is also experiencing a political shake up.  On 4 March the Parliament dismissed Prime Minister Oleksiy Honcharuk and his government after just six months in office without objective justification. It followed this by sacking the Prosecutor General whose work had been praised by Ukraine’s international partners. The president’s team also made a first step towards recognition of Russia-supported separatist Donbas ‘republics’ through their (possible, not yet confirmed) inclusion in Minsk talks.

As a result, Ukraine has entered into another period of uncertainty what has already led to an increase in interest rates on Ukrainian sovereign bond.

The present note chronicles these developments and their implications.