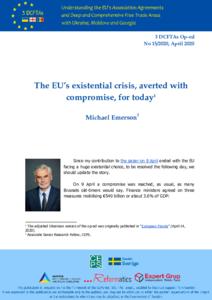 The EU’s existential crisis, averted with compromise, for today

Since my contribution to the paper on 8 April ended with the EU facing a huge existential choice, to be resolved the following day, we should update the story.

On 9 April a compromise was reached, as usual, as many Brussels old-timers would say. Finance ministers agreed on three measures mobilising €540 billion or about 3.6% of GDP:

So the amounts are massive, with more to come. Where does this leave the EU, given the high tensions surrounding the negotiations?

The biggest issue of discord was the request from Italy, supported by Spain and with some nuance France, for something in the category of ‘Eurobonds’ or ‘Coronabonds’ to bring massive help the most needy member states without increasing their public debt, which is already very high in the case of Italy and Greece.  The point of this proposition is that the borrower should be the EU, who would thus be responsible for servicing the debt, not the individual member states. ‘Mutualisation’ of the debt is the key word to represent this option.

This was contested by mostly northern member states, and most vociferously the Netherlands, who have made strong objections to anything that would result in transfers of financial grants, or aid that was not subject to conditions.  Germany has adopted this same position in the past, but Angela Merkel’s recent speeches have hinted at some possible flexibility, with emphasis on the historic strategic responsibility that the EU come together to overcome the crisis.

The Dutch position was to insist both on use of the European Stability Mechanism for funding the most needy states, meaning that the beneficiary state and not the EU would be the borrower, and that such funding would be subject to conditions to avoid creating a ‘moral hazard’ for potential borrowers. The use of this term in the present Covid-19 context is generally repudiated in public opinion as being irrelevant – to put it lightly.

The compromise outcome was thus that while the European Stability Mechanism would be used, not the Eurobond or Coronabonds, the only condition would be that the funds be used to support public health and pandemic-related social policies. In addition the European Commission and European Investment Bank  would undertake large scale borrowing or loan guarantee operation, and these operations mean that with the EU as borrower there is a degree of effective ‘mutualisation’.

So this is the compromise for the time being. The existential crisis is averted. But the story is far from finished. The overwhelming majority of academic economists and independent policy analysts in think tanks advocate more radical measures to assure the systemic sustainability of the EU. The mechanisms for this would come from the experience of various federations, and would see indeed mutualisation of large scale borrowing by the EU to fund measures to compensate for the deep recession that Covid-19 is imposing, such as unemployment or income maintenance programmes, or support for small and medium sized enterprises. These would be classic mechanisms of economic policy, but there is also a big political calculus at stake, notably what needs to be done to avoid a deepening estrangement toward the EU on the part of Italian public opinion.

As the lockdown continues, homeworking and video-conferencing reach a point that many commentators see now a permanent structural change to the global economy. Of course many will go back to the office or factory, but many will install themselves at home as their permanent work place. And much flying for business meetings and long-range touristic flying will be gone forever. Already Co2 emissions in urban centres have fallen drastically, maybe bringing climate policy objectives into sight of achievement. Could this become the big collateral impact of Covid-19? A global pandemic, threatening something on the scale of a medieval plague, was needed to save the planet from the irresponsibility of humankind’s behaviour over the last century. Have some Greek gods been at work?


The adjusted Ukrainian version of the op-ed was originally published in “European Pravda” (April 14, 2020).