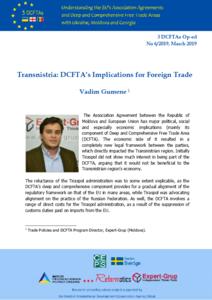 The Association Agreement between the Republic of Moldova and European Union has major political, social and especially economic implications (mainly its component of Deep and Comprehensive Free Trade Area (DCFTA). The economic side of it resulted in a completely new legal framework between the parties, which directly impacted the Transnistrian region. Initially Tiraspol did not show much interest in being part of the DCFTA, arguing that it would not be beneficial to the Transnistrian region’s economy.

The reluctance of the Tiraspol administration was to some extent explicable, as the DCFTA’s deep and comprehensive component provides for a gradual alignment of the regulatory framework on that of the EU in many areas, while Tiraspol was advocating alignment on the practice of the Russian Federation. As well, the DCFTA involves a range of direct costs for the Tiraspol administration, as a result of the suppression of customs duties paid on imports from the EU.

Tiraspol also thought they could make a separate agreement with the EU, enhancing their independence from Chisinau, but this was rejected by Brussels and Chisinau. As a result, and also under the pressure of the businesses in the region (it became obvious that the Autonomous Trade Preferences (ATPs) would not be extended after 1 January 2016), the Transnistrian administration had to find an urgent solution that would allow for continuation of its preferential exports to the EU.

This non-transparent approach towards the DCFTA implementation in the region has a geopolitical aspect. Hiding the precise content of the DCFTA’s implementation in the Transnistrian region prevents escalation of polemics among the main political and economic stakeholders from the region. Nonetheless, the content of various working processes suggests some progress in certain sectors (for example on the coding of commodities, the tariff regime, rules of origin, sanitary and phytosanitary requirements, technical barriers to trade), and which presumably corresponds to the content of the ’non-paper’.

A number of aspects covered by the DCFTA (such as competition, state aid, intellectual property, energy, services) would require a deeper involvement, considering that there is no regulatory framework in operation in the Transnistrian region in most of these areas, or even less one that would be in line with EU or international rules.

A full implementation of the DCFTA in the Transnistrian region is virtually impossible, because of many objective and subjective reasons. Nonetheless a closer relationship between the Chisinau authorities and those of the Transnistrian region could be feasible, at least as far as the key provisions are concerned, which would guarantee that on the one hand that the preferential system will not be suspended, and on the other hand that the EU’s economic interests will not be undermined.

The most convincing evidence of the importance of the DCFTA for the region are provided by export statistics. Despite persistent political rhetoric about the value of economic integration with Russia and the Eurasian Economic Union, exports from the Transnistrian region depends deeply on the EU market, which absorbs 55-65% of its total exports, of which Romania is taking a leading share.

However, the dynamics of exports in all directions are vulnerable to external shocks, especially given the high level of concentration by product structure and geographic destinations. The sensitive nature of Transnistrian exports is caused by the massive focus on particular industrial sectors (metallurgy and textiles), which is a structure inherited from the Soviet Union (one single metallurgy company and several textile companies).