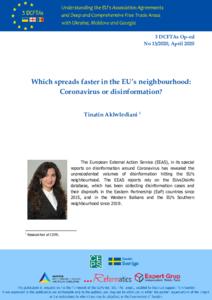 Which spreads faster in the EU’s neighbourhood: Coronavirus or disinformation?

The European External Action Service (EEAS), in its special reports on disinformation around Coronavirus has revealed the unprecedented volumes of disinformation hitting the EU’s neighbourhood. The EEAS reports rely on the EUvsDisinfo database, which has been collecting disinformation cases and their disproofs in the Eastern Partnership (EaP) countries since 2015, and in the Western Balkans and the EU’s Southern neighbourhood since 2019.

According to the latest EEAS report, disinformation in the WesternBalkans include conspiracy theories suggesting that the Coronavirus is an American bioweapon. Fake news also seems to aim at a narrative that the EU is turning its back on the Western Balkans since the outbreak of pandemic.

In the EU’s EasternNeighbourhood, each of six EaP countries face different types of information disorders including disinformation, propaganda, restrictions of freedom of expression and hacks of personal data.

In Ukraine some fake “horror stories” suggested that 400,000 Ukrainians were infected, at a time (19 of March) when the number of infected people stood below 100. The President of Ukraine, Volodymyr Zelensky, even said in a TV interview that “false information spreads much faster than the virus”. To counter such disinformation, the cyber police of Ukraine removed dozens of fake coronavirus-related messages from social media platforms, and arrested an “agitator” assumed to be sent by Russia to spread the fake news. The Ministry of Healthcare launched a service of instant information in cooperation with Facebook, allowing the Ministry to send official information about the spread of the pandemic via Facebook notifications.

In Moldova among other fake stories, it has been suggested that former Prime Minister Maia Sandu asked the EU to impose an embargo on Moldovan products, and alleged that Moldova and Armenia are subjected to total aggression led by the “George Soros Monster”, and that Coronavirus is just a lie. In 2018, according to the study conducted by the Eurasian States in Transition Research Center, Moldova was named as the Eastern European state most vulnerable to Russian propaganda and disinformation. Moldova’s top television channels re-broadcast Russian programs and the online media largely favours the Kremlin narratives.

Georgia, has recently become the victim of large-scale data hack. On March 30th the personal information of more than 4.9 million Georgians was published on a hacking forum. The leaked data included full names, home addresses, dates of birth, ID numbers, and mobile phone numbers of Georgians, including deceased individuals. This amounts to leaked information relevant for the upcoming parliamentary elections in October. False narratives on the social media suggest that the EU Monitoring Mission (EUMM) helps Tbilisi to violate the border with South Ossetia during the outbreak of the pandemic, and that the Coronavirus is an ethnic biological weapon originating in American laboratories. Other messages on Facebook refer to the fake “miracle cures” for the Coronavirus that could have had fatal effects.

In Armenia, the EUvsDisinfo database recorded false narratives about the pro-Turkish Soros wanting to appoint a president in Karabakh, about secret Pentagon’s Biolabs in Armenia threatening the existence of the nation, and about satanic Western societies leading perverse practises. As the pandemic has spread in Armenia faster than in its EaP neighbours, the authorities declared a state of emergency which included a ban on publishing or sharing any unofficial information on the pandemic. This suggests that the fast outbreak of Covid-19 could make it difficult for the government to cope with the health crisis and disinformation at the same time.

In the rest of the EaP countries the access to critical information and the freedom of expression is alarmingly threatened. In Azerbaijan the government provides a dedicated webpage for its updates on the Coronavirus. However the parliament has recently passed legislation to restrict reporting by bloggers and journalists, which enabled the government to arrest three bloggers. Belarus has only recently (April) started providing regular updates to inform the population about the spread of pandemics. However, the reports by the authorities are criticised for understating Corona-related death statistics and authors of criticism are detained.

Who is to blame?

According to the EUvsDisinfo, disinformation in the EU’s neighbourhood seems to originate largely from pro-Kremlin sources. The EEAS’s database has already recorded more than 6,500 of such samples, out of which around 200 cases are detected since the outbreak of pandemic. Other sources of the fake news mostly in the Western Balkans also include China. In case of several EaP countries, such as Belarus and Azerbaijan, currently the governments are in charge of judging what is fake and what needs to be disseminated.

As for the large-scale data hacks, Russia has a twelve-year history of cyberattacks against the EU’s associated states. In 2008 Georgia faced a large-scale cyberattack coinciding with Russia’s military intervention. Since then cyberattacks continue against government websites, media, private sector, energy companies and election commissions in Georgia, Moldova and Ukraine. Most recently, (February 2020) Georgia made public the results of the investigation of the October 2019 cyberattack, during which hackers took down 2000 websites, including those of the President, the Courts, NGOs, local self-governments and private organisations. Georgia publicly condemned Russia for this targeted attack. Following this statement, the EU condemned the cyberattacks and promised to help Georgia to improve cyber resilience. However the EU’s statement refrained from mentioning Russia behind this cyberattack.

What did we learn?

Within just a couple of months, the outbreak of Covid-19 has led to the global health crisis and not only. It also led to the outbreak of disinformation, which seems to spread faster than the pandemic itself in the EU’s neighbourhood. As suggested by the EEAS’s special reports, false narratives are mostly organised and automated from pro-Kremlin sources, and aim at distorting the EU’s image and manipulating many sensitive issues, including the situation in the conflict areas. Russia has already made several statements suggesting that Russia-led ‘information’ efforts will only be reinforced. In the meantime China’s ‘mask diplomacy’ has materialized in Serbia to the point that billboards with images of the Chinese President Xi Jinping express Belgrade’s gratitude to “brother Xi”.

To counter the disinformation narratives, the EU has recently on 8 April published a comprehensive paper on how it is responding to the Coronavirus in the world.This includes announcements on mobilising funds for its neighbours, with €962 million for the EaP states, and €700 million for the Western Balkans. This also includes reinforcing the fight against disinformation, naming the Russian sources of information disorders.This is particularly important for the EU’s neighbours who are often in need of the EU’s support to condemn the pro-Kremlin origins of the information warfare against them. Overall, the outbreak of Coronavirus once more highlighted that the EU should systematically fight against disinformation, and assure access to critical information and freedom of expression in its neighbourhood post-2020.