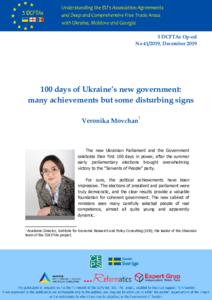 100 days of Ukraine’s new government: many achievements but some disturbing signs

The new Ukrainian Parliament and the Government celebrate their first 100 days in power, after the summer early parliamentary elections brought overwhelming victory to the “Servants of People” party.

For sure, the political achievements have been impressive. The elections of president and parliament were truly democratic, and the clear results provide a valuable foundation for coherent government. The new cabinet of ministers sees many carefully selected people of real competence, almost all quite young and apparently dynamic.

These 100 days have felt quite dizzying. There were many very good steps, breaking through the deadlocks of the last several years. However, there have been also some very disturbing developments. The risks – if realized – could undermine the entire progress. Everyday news feed both ‘baskets’, and it is very hard to draw the concluding line. Below we summarize main achievements and threats, mainly in the economic policy sphere.