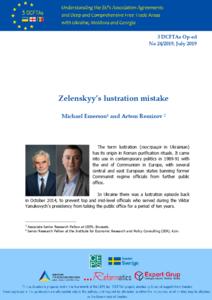 The term lustration (люстрація in Ukrainian) has its origin in Roman purification rituals. It came into use in contemporary politics in 1989-91 with the end of Communism in Europe, with several central and east European states banning former Communist regime officials from further public office.

In Ukraine there was a lustration episode back in October 2014, to prevent top and mid-level officials who served during the Viktor Yanukovych’s presidency from taking the public office for a period of ten years.

Now, on 11 July President Zelenskyy addressed to the Rada a new draft lustration law, banning from public office high officials of the Poroshenko administration who had served between February 2014 and April 2019. The list of positions whose holders would fall under lustration is quite extensive. It is ranging from prime-ministers (Ukraine had two since 2014), ministers (though not deputy ministers), and heads of other executive bodies and state enterprises to heads of the National bank, heads of the National Security and Defense Council, heads and deputy heads of security service, intelligence, the general prosecutor (as well as heads and deputy head of territorial divisions of the prosecutor’s office and respective security agencies), chiefs of staff of the army, members of major judicial bodies and judges. The proposal adds MPs to the lustration list. The draft law also banns the listed individuals not only form holding public office, but also from participation in any kind of future elections, neither at national nor local level.

Zelenskyy is seeking to make comparable the times of the Yanukovych rule and the post-Euromaidan period of ex-president Poroshenko. The idea of equivalence here was immediately rejected in a remarkable statement by G7 ambassadors on 12 July [1]:

Electoral change and political rotation are the norm in democracies. Indiscriminate bans on all participants in executive and legislative governance are not. Since 2014, we have been appreciative of reform progress achieved in some important areas. While it is right to hold those guilty of abusing their office to account, the situation on Ukraine today is, in our conviction, not comparable to that after the Revolution of Dignity.

What could be the reasons for such a controversial step?

Firstly, it seems aimed at getting more populist support for Zelenskyy’s party “Servant of the people” at the forthcoming general election of the Rada on July 21. The party would like to obtain a simple majority in order to form the government on its own. There is a chance that this could happen since various polls show that the party could secure around 42-52% of votes.

Secondly, Zelenskyy has been frustrated by his inability to get various ministers of the Poroshenko administration to be removed from office, including foreign minister Pavlo Klimkin, due to the Rada supporting their continuing in office.

Third, the lustration could clean out the political opposition of many key personalities While such an indiscriminate approach contradicts the principle of presumption of innocence, it could also push out from the political arena many professionals that were in charge of successful reforms and possess high levels of expertise. The high official of the Poroshenko administration best known to the EU has been deputy-prime minister for Euro-Atlantic integration, Ivanna Klympush-Tsintsadze, formerly a civil society leader before entering politics. She is generally respected in Brussels as a distinguished personality of unquestioned integrity. For her and others to be subject of lustration in a Europe-oriented democracy is frankly absurd, and certainly damaging to the reputation of the new administration.

Even some of the prominent members of Zelenkyy’ National Security and Defence Council s own team, such as the ex-minister of finance Oleksandr Danyliuk and the ex-minister of economy Aivaras Abromavičius, who are considered by the Western partners as reformers could fall under the lustration. Moreover Zelenskyy’s own chief of staff, Andrii Bohdan, is himself subject of the 2014 lustration law, having served as commissioner for anti-corruption policies in Mykola Azarov’s government.

Since the outgoing Rada has already held its last session, it will not consider this ill-considered draft law, which should be re-submitted to the new Parliament. In the meantime, while there is no guarantee that Zelenskyy will re-submit the law. Best, forget it.

This publication is prepared within the framework of the CEPS-led ‘3DCFTAs’ project, enabled by financial support from Sweden.

Views expressed in this publication are attributable only to the authors, and may not be attributed to either the institutions to which they may be attached, or the Government of Sweden.