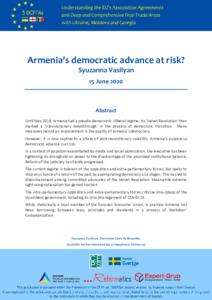 Until May 2018, Armenia had a pseudo-democratic, illiberal regime. Its ‘Velvet Revolution’ then marked a ‘(r)evolutionary breakthrough’ in the process of democratic transition. Many measures record an improvement in the quality of Armenia’s democracy.

However, it is now captive to a phase of post-revolutionary volatility. Armenia’s auspicious democratic advance is at risk.

In a context of populism exacerbated by media and social polarization, the executive has been tightening its stronghold on power to the disadvantage of the promised institutional balance. Reform of the judiciary has hardly progressed.

The current regime is tolerant of the opposition and extra-parliamentary forces, but seeks to stop any chance of a return of the past by appropriating democracy as a slogan. This has led to disenchantment among committed advocates of the Velvet Revolution. Meanwhile extreme right-wing nationalism has gained traction.

While rhetorically a loyal member of the Eurasian Economic Union, in practice Armenia has been borrowing European laws, principles and standards in a process of ‘backdoor’ Europeanization.