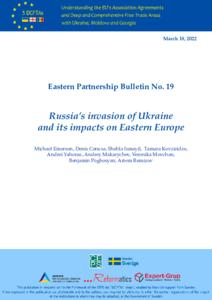 EaP Bulletin No 19: Russia’s invasion of Ukraine and its impacts on Eastern Europe

From Ukraine the first essential observation is that the Russian Blitzkrieg, originally intended to secure control of Kyiv and overthrow the government within a week or two, has failed. The advance on Kyiv seems halted.  Public opinion polls in Ukraine show a huge 92% majority believing that Ukraine will win the war, such has been their incredible resilience in stopping the huge Russian military machine.

The image in the EU of Ukraine, its people and President Zelensky has been totally transformed into one of heroism alongside terrible human suffering, while Putin becomes the embodiment of evil comparable with Hitler. The people of Ukraine are seen to be fighting with their lives our common struggle to defend the European values of democracy, fundamental freedoms and civilised intnerational relations against the common enemy. They deserve from the EU a commensurate response to the formal request by Zelensky for Ukraine’s accession. At its Versailles summit on 10-11 March the EU could only give a holding answer, inviting the Commission to formulate an Opinion on Ukraine’s application, as also those of Moldova and Georgia.

The impact on Moldova, Georgia, Armenia and Azerbaijan follows a pattern of public opinion and civil society overwhelmingly (except for Armenia) supporting Ukraine, while their governments take more cautious positions to avoid antagonising Russia, and their economies are hit inter alia through lower remittances. There are complex issues arising through refugee and migrant movemements. Moldova receives more Ukrainian migrants per capita than even Poland. Armenia and Georgia on the other hand are receiving large numbers of Russian migrants. Belarus for its part, complicit in Russia’s military operations, has become even more of a Russian satellite  state.

The EU and UK have, with the US, imposed unprecented sanctions, now challenging the conventional wisdom that sanctions don’t work, especially against Russia. The EU has further taken the unprecedented step to supply military weapons to Ukraine. The ongoing flow of refugee women and children into the EU is massive, reaching 2.5 million by 14 March; the support for the immigrants is also unprecedented both at EU level with the granting of rights to live, work, study and receive accommodation and healrth care, and through spontaneous initiaitives of people in opening their homes to immigrant families.

While at the time of writing the war continues with Russian bombardment of Ukrainian cities, reports are emerging that ceasefire talks are progressing, but without clarity yet on the terms of a possible agreement.