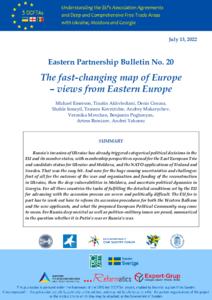 EaP Bulletin No 20: The fast-changing map of Europe – views from Eastern Europe

Russia’s invasion of Ukraine has already triggered categorical political decisions in the EU and its member states, with membership perspectives opened for the Trio and candidate status for Ukraine and Moldova, and the NATO applications of Finland and Sweden. That was the easy bit. And now for the huge ensuing  uncertainties and challenges: first of all for the outcome of the war and organisation and funding of the reconstruction in Ukraine, the deep vulnerabilities in Moldova, and uncertain political dy namics in Georgia. For all three countries the tasks of fulfilling the detailed conditions set by the EU for advancing with the accession process are severe and politically difficult. The EU for is part has to work out how to reform its accession procedures for both the Western Balkans and the new applicants, and what the propose European Political Community may come to mean. For Russia deep societal as well as politico-military issues are posed, summarized in the question whether it is Putin’s war or Russia’s war.