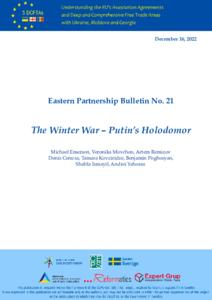 All his military strategies having failed so far, in his desperation Putin is now engaged in a genocidal campaign to freeze the citizens of Ukraine to mass death by hyperthermia, through bombing the electricity infrastructure into destruction. Maybe he hopes that this prospect will lead Ukraine to capitulate, but there is no sign of that happening, on the contrary, there seems to be a strengthening of their resolve to resist. Tragically, it will be the elderly, frail and immobile who will die, while the younger generation of women and children will be pushed into another wave of mass emigration, joining the four million already in the rest of Europe. This becomes Putin's Holodomor.

This emerging humanitarian disaster leads to the case for a powerful response by the EU and G7 beyond what they are already doing, namely to make Putin pay for his damages without further delay. The means to do this lie with the EU and G7 leaders in the $300 billion of financial assets of the Russian central bank frozen in western financial institutions. These sovereign assets customarily benefit from immunity from seizure by the countries in which they are held. But international lawyers have been investigating this question and as our survey shows a set of robust criteria can be established for an exceptional derogation for this principle, with Putin shown to be meeting all of them.

The following short papers include a comprehensive account of the impact of the war on Ukraine in all its aspects – military, economic, societal and political – with 'resilience' a key word and reality. In Moldova, there has been a dramatic collateral impact on energy supplies for both electricity and gas supplies, mitigated in part by supplies from Romania. In both countries, as also for Georgia, the new implications of EU membership perspectives impact the political agenda. In Belarus, the economic impact of western sanctions is now biting hard. In the South Caucasus, there have also been major collateral impacts, with large-scale emigration from Russia into both Georgia and Armenia enhancing economic growth, spectacularly so in Armenia. Azerbaijan for its part gets a big boost to oil and gas revenues. However, for both Armenia and Azerbaijan the search for a peace agreement is at the top political agenda. There have been moments of hope, but at the time of writing fear for a new escalation of violence predominates.