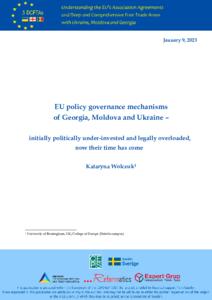 Russia’s aggression against Ukraine has thrown the EU policy towards its East European neighbours into the spotlight. The EU member states responded to the challenge presented to European security by granting candidate status to Ukraine and Moldova (with Georgia’s candidate status pending) in June 2022.[1] Much is needed to move beyond the symbolism of granting candidate status. The formal parameters of the new enlargement strategy have yet to be clarified in order to ensure that accession is viable and effective.

This paper will take stock of the existing framework for relations with Ukraine, Moldova and Georgia, namely the Association Agreements with the Deep and Comprehensive Free Trade Areas (AA-DCFTAs). These agreements, as a legal framework for preparation of accession are fit for purpose. From a legal point of view, they are viable instruments to drive integration when coupled with the membership perspective.

The experimental nature of the AA-DCFTAs has been evident in their aims and design. They have been more ambitious and comprehensive than the Stabilisation and Association Agreements signed with the Western Balkan countries, which have been offered the membership perspective. And yet the AA-DCFTAs were conceived and implemented as a foreign policy instrument rather than as stepping stone to membership.

This paper provides an analysis of the effectiveness of this approach (i.e. using the AAs to drive domestic reforms) by focussing on the domestic impact of the AA-DCFTA. Borrowing from the accession process, the EU encouraged the partner countries to adopt governance mechanisms modelled on the ‘best practice’ in the accession countries. How effective was such a transplant of ‘best practice’ outside the accession pathway? This paper illustrates that the three countries kept to script and did indeed develop their EU policy governance mechanisms along the lines modelled by accession states. However, the analysis of the EU policy governance mechanisms show the limited effectiveness of the agreements to create effective coordination. While the AA-DCFTA was imbued with massive commitments, the AA-DCFTAs alone could not offer the same impetus to action as observed in the Central European accession countries. While being (over)loaded with legal commitments, the AA-DCFTA – on their own - proved too underpowered in political terms to achieve a similar domestic impact. This shows the crucial role of the overall incentive and longer-term vision in EU’s ability to promote integration with - and modernisation of - the eastern neighbour partners.

Nevertheless, it is also argued the use of AA-DCFTAs has not been without considerable merit – their implementation offered an invaluable experience along a steep learning curve for the partner countries and the EU, arguably providing an excellent basis for their upgrade to the candidate status. Ironically, in light of the fact that the AA-DCFTAs were designed to bypass the question of membership, the agreements become excellent guides for the road to membership. In the current context of war on European soil, and the offer of candidate status for Ukraine, Moldova (and potentially Georgia), the AA-DCFTAs are now placed within a wider vision, one which is also underpinned by important technical processes such as incentives and monitoring. Therefore, the final verdict on the AA-DCFTA and its ultimate usefulness in the EU’s portfolio of foreign policy tools will depend on whether the EU is able to match the legal content with the necessary political vision in the next stage of relations, namely the enlargement process.