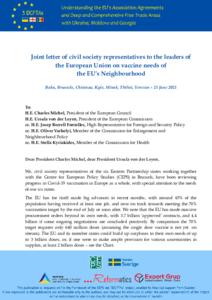 cc. H.E. Oliver Varhelyi, Member of the Commission for Enlargement and Neighbourhood Policy

cc. H.E. Stella Kyriakides, Member of the Commission for Health

We, civil society representatives of the six Eastern Partnership states working together with the Centre for European Policy Studies (CEPS) in Brussels, have been reviewing progress in Covid-19 vaccination in Europe as a whole, with special attention to the needs of our six states.

The EU has for itself made big advances in recent months, with around 45% of the population having received at least one jab, and now on track towards meeting the 70% vaccination target by the end of July or soon after. We note that the EU has made massive procurement orders beyond its own needs, with 3.7 billion ‘approved’ contracts, and 4.4 billion if some ongoing negotiations are concluded positively. By comparison the 70% target requires only 640 million doses (assuming the single dose vaccine is not yet  on stream). The EU and its member states could build up surpluses to their own needs of up to 3 billion doses, or, if one were to make ample provision for various uncertainties in supplies, at least 2 billion doses – see the Chart. 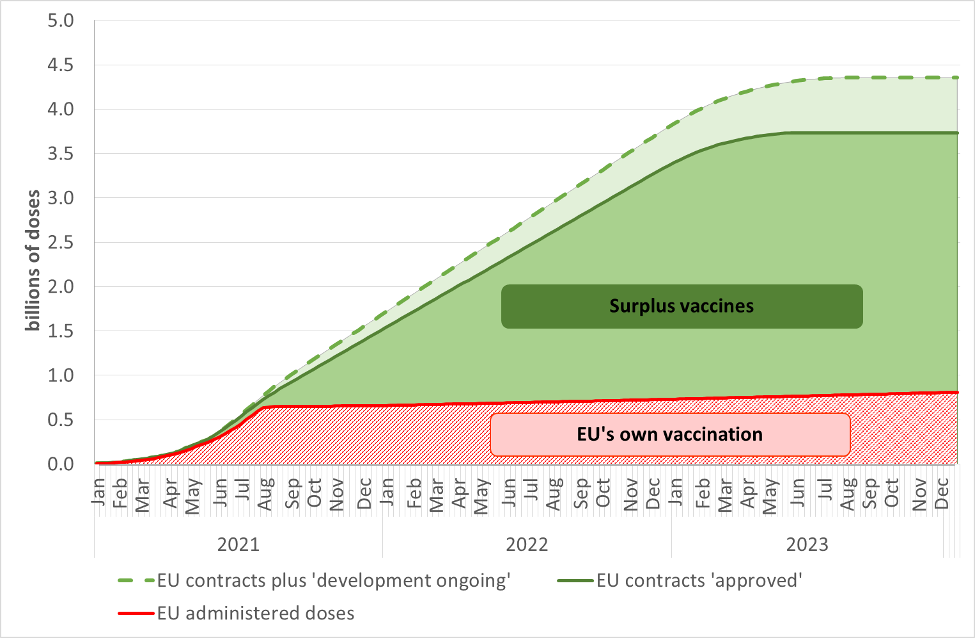 On the other hand the six Eastern Partnership states lag a long way behind, with only a 6.5% population coverage so far on average, with some states as low as 1 to 3% still (which compare with the average for Africa of 2.3%). The six Western Balkans are doing somewhat better with 16.6% coverage on average, and also the South Mediterranean states with 10.1% coverage on the average for 5 states.

In the Eastern Partnership states there is a gravely insufficient supply of vaccines. We have looked in detail as thoroughly as possible at the extent of secured supplies and of outstanding unsecured needs. Our estimates, which can only be approximate, indicate that the six states have been able to secure around half their total needs of about 100 million doses, but with the global vaccine supply shortage they have great difficulty in securing the other half, which we estimate to amount to about 47 million doses.

We have noted that the European Commission announced in January that it would be developing a vaccine sharing mechanism, targeting especially its neighbourhood and Africa. It recently in May announced a pledge of 100 million doses to ‘low and middle income countries’ without further details. If the 100 million doses were distributed to these targeted regions, whose total population is I.3 billion, and assuming 2 doses per head for 70% of the population, this would only amount to a 3.8% coverage of needs, thus a marginal rather than strategic contribution.

The EU’s huge surplus purchases can be considered to be in the international public interest on two accounts: providing solid incentives for manufacturers to invest in increased production capacity, and use of its purchasing power to get best prices. However this positive contribution then finally depends on decisions to distribute the surpluses beyond the EU’s prudent needs, with full information on the planned timing and distribution criteria, without which the process could look like hoarding. As of now this information is not available. With regard to the 100 million doses announced, this can only be viewed as a useful but marginal first step, which needs to be scaled up many times. For example one can note that the 2 billion surplus quoted above would more than cover the total needs of the EU’s favoured regions, Africa and the EU neighbourhood (1.3 billion population x 2 x 0.7 = 1.82 billion doses). These are huge numbers, but it is the EU’s duty, having pre-empted such an important share of global manufacturing capacity, to set out how it proposes to distribute its (prudently defined) surpluses.

We return in conclusion to the concerns of the Eastern Partnership states. It follows from the numbers cited that the EU could define a clear and decisive position, to assure the Eastern Partnership states of around 47 million doses so as to enable full 70% vaccination over a reasonable time horizon such as the next twelve months. We can imagine that the EU would want to treat the Western Balkans at least comparably, which in our rough estimations would require only an additional 12 million doses. The rationale for such decisions is inter alia about contagion risk for the EU, given that these regions are territorially contiguous with the EU and have visa-free travel agreements facilitating connectivity. These amounts are very small in relation to the EU’s available surpluses, and would therefore not prejudice the EU’s capacity to address the much larger needs of Africa.

We are aware that the EU-procured vaccines are effectively owned by the member states, and that part of the distribution of surpluses may be executed by individual member states. Bilateral supplies begin to be made (for example by Poland, Romania and others). However the proportions of these supplies in relation to the needs of the beneficiary states is still very marginal, with the exception of Romania which is making really significant supplies to Moldova.

Finally we have considered the question whether in our view the EU should differentiate the scale of its distributions as between the Eastern Partnership states as a function of the closeness of their political  relations with the EU, which obviously vary. For our part we advocate equal treatment on the grounds that this is first of all a humanitarian matter, and secondly one of physical proximity.

To summarise, we advocate the following: