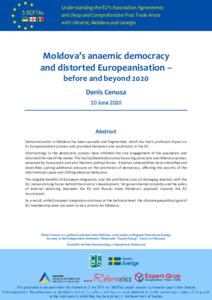 Moldova’s anaemic democracy and distorted Europeanisation – before and beyond 2020

Democratisation in Moldova has been sporadic and fragmented, which has had a profound impact on its Europeanisation process and provoked hesitation and uncertainty in the EU.

Shortcomings in the democratic process have inhibited the civic engagement of the population and distorted the role of the media. This has facilitated discourses favouring autocratic and illiberal practices, advanced by Eurosceptic and anti-Western political forces. External vulnerabilities have intensified and diversified, putting additional pressure on the promotion of democracy, affecting the security of the informational space and shifting electoral behaviour.

The tangible benefits of European integration, and the prohibitive costs of damaging relations with the EU, remain driving forces behind the country’s development. Yet governmental instability and the policy of external balancing (between the EU and Russia) make Moldova’s approach towards the EU inconsistent.

As a result, while European integration continues at the technical level, the ultimate geopolitical goal of EU membership does not seem to be a priority for Moldova.