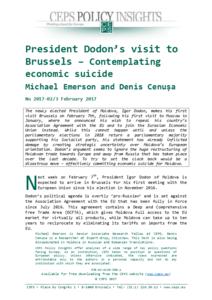 The newly elected President of Moldova, Igor Dodon, makes his first visit Brussels on February 7th, following his first visit to Moscow in January, where he announced his wish to repeal his country’s Association Agreement with the EU and to join the Eurasian Economic Union instead. While this cannot happen until and unless the parliamentary elections in 2018 return a parliamentary majority supporting his Socialist party, his statement has already inflicted damage by creating strategic uncertainty over Moldova’s European orientation. Dodon’s argument seems to ignore the huge restructuring of Moldovan trade towards Europe and away from Russia that has taken place over the last decade. To try to set the clock back would be a disastrous move – effectively committing economic suicide for Moldova.