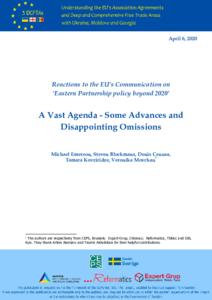 Reactions to the EU’s Communication on ‘Eastern Partnership policy beyond 2020’: A Vast Agenda - Some Advances and Disappointing Omissions

This detailed, 18-page Communication is intended to set the agenda for the Eastern Partnership (EaP) Summit on 18 June 2020, which in turn should decide jointly agreed orientations of the EU and the partner states for EaP policy beyond 2020.

This is only given a passing reference, understandably so because this huge crisis is so new and ongoing. However the time between now and the June Summit will allow for a fuller treatment of its implications for the EaP. Being a quintessential humanitarian crisis, it deserves an EaP-wide response. EU support for supplies of medical equipment is a first immediate necessity, to be followed in due course by intensified cooperation over counter-pandemic capabilities, as also macro-financial assistance to help survive the oncoming deep recession. The EU’s recent decision to allocate grant funds for immediate needs, such as the acquisition of medical equipment, and for ensuring liquidity for SMEs, are exactly the type of assistance that the EaP countries have been waiting for.

2.   A Vast Agenda of Questionable Weight.

The Communication covers a huge landscape of policy domains, first of all economic issues that take a large place in the paper. The text refers to deepening economic integration through full implementation of the current DCFTAs, and a selective and gradual economic integration into the EU’s internal market, but thus far nothing new. However the paper gives place to currently rising policy areas, notably in the energy/environment/climate nexus (Green Deal), digital and cyber, transport (TEN-T infrastructures, civil aviation), Single European Payment Area (SEPA), etc. It also proposes a New Deal for Youth.

Green Deal. The EU’s proposed Green Deal has potentially huge and complex implications for energy, environmental and climate policy domains, especially for the DCFTA states given their close approximation of the EU acquis in these areas, and their signalled interest in joining the initiative. This is an example where dialogue between the associated states and the EU should be initiated (in ‘quad’ format, on which see more below).

Digital and Cyber. The fast growing digital and cyber agendas are summarised. On digital the associated states have already adopted what the document advocates for the legal frameworks for electronic identification schemes and electronic trust services, and there is scope for the other three EaP states to catch up. However the text fails to respond to the ambition of the AA states to join the Digital Single Market. The EU advocates working towards a roaming agreement in the EaP area, but the main interest of the partner states would be for a roaming agreement between them and the EU itself.

Physical Connectivity. Transport and energy are traditional areas promoted by the EU for physical interconnections with the EaP region, and the text gives due attention to the TEN-T networks and gas corridors. However on road transport there is no recognition of the need for adequate road transport agreements. This is now an urgent matter, given that the desired trade expansion between the EU and Ukraine is now threatened by the EU’s archaic (‘pre-single market’) regime of bilateral road haulage permits. The protectionist policies of some EU member states in this sector are not fair to the DCFTA partner states that have opened their economies to overwhelmingly more powerful European enterprises – as long as the DCFTA states catch up in implementing their approximation commitments in this field.

New Deal for Youth.This lists a number of desirable policy objectives, but the instruments are either not specified, or fragmentary. The Bologna process is hardly a new deal. The reader has the impression that this non-political area was seen as an easily acceptable topic for all six Eastern Partners, without the substance to justify the grand heading.

No time perspective. The communication is silent about the timeframe it covers and only specifies that it refers to the period ‘beyond 2020’. It is thus unclear what time horizon is envisaged.

No strategic political objectives. The document does not set any strategic objective to indicate where this extensive agenda should lead, either for the AA states, or the EaP as a whole. It is silent about the political question ‘what next?’. It reads as a compilation of various ongoing measures and policies between the EU and the EaP states.

Token wording on democracy. It is disappointing that the text gives no more than an occasional word of support for good democratic practice, often preferring the ambiguous term ‘governance’. There is much on the need for a robust rule of law, but if that is not accompanied by democracy it serves to reinforce authoritarianism.

Silence on gender policy. This is ignored, very surprisingly in view of the EU’s overall gender policy, and its intention to mainstream gender in its international relations. The Commission has very recently (also in March 2020) issued a comprehensive Communication on its gender policy. In 2018 the EU adopted a text on women, peace and security, to which the text refers. But overall the text is odd, in covering such a vast landscape of issues while ignoring gender policy as such. The new gender Communication should provide the basis to make up this gap.

Silence on the unresolved separatist conflicts. This is also ignored, beyond token words about being committed to the peaceful settlement of conflicts. Existing formats of diplomacy for dealing with the conflicts affecting EaP states largely exclude the EU as such. The partner states expect more of the EU, and are puzzled why for example the ‘Normandy format’ for the Donbas involving France and Germany could not replicate the old ‘Iran model’ where there was a leading  EU participation alongside three member states. In the case of the Transdniestrian region the EU’s observer status should be advanced to that of a full-fledged participant. Detailed recommendations for how the EU could do more have been set out in a recent publication covering all the unresolved conflicts of Eastern Europe.

Inadequate specification of ‘more for more’. There is continued invocation of the ‘more for more’ principle, without operational guidelines over what ‘more’ the EU might contribute in relation to what ‘more’ policy reform measures by the EaP states. Matters of detailed conditionality are of course something for bilateral negotiations, but a more credible operational framing of the principle is still needed for it to be seen as more than a slogan.

4.   The Strategic Omission - silence on the joint request of the AA/DCFTA states.

The paper draws on many themes that feature in the contributions by the EaP states to the ‘structured consultation’ conducted in 2019. However there is one proposition common to submissions of the three states with Association Agreements – Georgia, Moldova and Ukraine – that is ignored, namely their wish to open joint dealings or dialogue with the EU. This would treat matters of common concern to them, and which are not relevant or plausible in relation to the other EaP states.

This omission from the Communication should be corrected with agreement to extend use of the ‘quadrilateral’ format between the EU with the three associated states for which there is one precedent already, namely ‘quad’ meetings of trade policy officials/ministers. However there are many other issues that deserve ‘quad’ dialogue, including how revisions of major EU policies (such as energy, climate, competition policies) may affect the associated states. There is also a need for debate at a suitable political level on strategic orientations for overarching aspects of the association relationship.

The original AA/DCFTA was negotiated around a decade ago with Ukraine alone, and this became the model for the other agreements, with some differences but a large commonality in the texts. Since then the AA/DCFTA system has matured. The EU always sought to encourage intra-regional cooperation and integration. The three associated states have reached the point of being ready for and are requesting ‘quad’ deliberations. Their bilateral relations will no doubt remain of primary importance. But this should not be to the exclusion of needed ‘quad’ business.

The omission of reference to the joint request of the three AA states correlates with the very general level of policy orientations in much of the paper, with relatively little operational specificity. This drafting is presumably intended to be acceptable to all six EaP states.

Differentiation and inclusiveness doctrine. These terms used by the EU institutions will sound obscurely doctrinal and remote to the peoples of the Eastern Partnership. However for those involved in EU policy these words are vehicles of debate and negotiations within the EU institutions, and between them and the member states, and stand for alternative priorities. Of course there is diplomatic discourse saying that there has to be both. But in reality it concerns strategic priorities, how far the ambitious European integration objectives of the three associated states are to be supported, or how far the agenda of the Eastern Partnership is to be limited to what all six partner states can accept, with the risk of a lowest common denominator factor. The absence so far of response from the EU to the request of the three associated states to have joint dealings with the EU is a discouraging signal for them.

These two opposing paradigms can be reconciled along the following lines. The three associated states can be encouraged to deepen their integration with the EU, politically and economically, as far as they wish and are able to do so (without raising the question of enlargement procedures). The operational instruments for so doing can be clearly identified. There should be a presumption that such instruments should be open in principle to the other three EaP states, and Armenia shows that it wants to follow this path to a considerable degree. However where there are political, institutional or legal reasons why this is not possible, these have to be recognised: for example, two EaP states do not want to commit to European political values, and have limited trade integration possibilities due to their non-membership of the WTO. These basic facts should not hold back the associated states in the name of assuring ‘inclusiveness’.

The argument sometimes heard in EU circles is that some special institutional arrangements with the three associates together would discourage the other three from cooperation in the EaP. There is no evidence for this assertion. On the contrary, if the EU’s cooperation with the three associates is seen to be rich and dynamic, this will encourage the other three to engage further wherever the instruments in question are feasible for them.