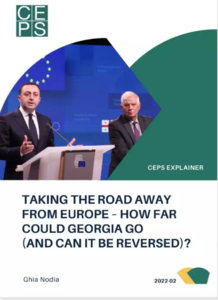 Taking the road away from Europe – how far could Georgia go (and can it be reversed)?

Earlier this year, as a result of the Russian invasion of Ukraine, Moldova and Ukraine were granted official EU candidate status… but not Georgia. Instead, Georgia has been left behind on the waiting list, with its application due to be reevaluated by the EU sometime in 2023. Yet Georgia has an extremely pro-European society highly in favour of their country continuing its journey towards closer integration with the EU. So what happened? This CEPS Explainer argues that the ruling Georgian Dream party’s anti-Western rhetoric and democratic backsliding has actually diverted Georgia down a road away from its key Western allies. Until this is rectified, Georgia may be stuck on the waiting list for some time yet. But all hope is not lost – regardless of the government’s current actions and contradictory statements, Georgia’s highly active and pro-European civil society may hold the key in getting their country back on track towards its European future.