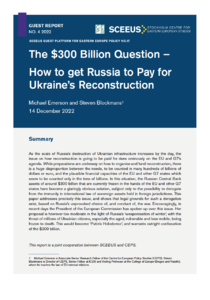 The $300 Billion Question: How to get Russia to pay for Ukraine’s reconstruction

As the scale of Russia’s destruction of Ukrainian infrastructure increases by the day, the issue on how reconstruction is going to be paid for rises ominously on the EU and G7’s agenda. While preparations are underway on how to organise and fund reconstruction, there is a huge disproportion between the needs, to be counted in many hundreds of billions of dollars or euro, and the plausible financial capacities of the EU and other G7 states which seem to be counted only in the tens of billions. In this situation, the Russian Central Bank assets of around $300 billion that are currently frozen in the hands of the EU and other G7 states have become a glaringly obvious solution, subject only to the possibility to derogate from the immunity in international law of sovereign assets held in foreign jurisdictions. This paper addresses precisely this issue, and shows that legal grounds for such a derogation exist, based on Russia’s unprovoked choice of, and conduct of, the war. Encouragingly, in recent days the President of the European Commission has spoken up over this issue. Her proposal is however too moderate in the light of Russia’s ‘weaponisation of winter’, with the threat of millions of Ukrainian citizens, especially the aged, vulnerable and less mobile, being frozen to death. This would become ‘Putin’s Holodomor’, and warrants outright confiscation of the $300 billion.

This report is a joint cooperation between SCEEUS and CEPS.