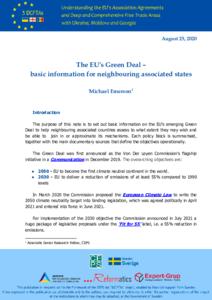 The purpose of this note is to set out basic information on the EU’s emerging Green Deal to help neighbouring associated countries assess to what extent they may wish and be able to  join in or approximate its mechanisms. Each policy block is summarised, together with the main documentary sources that define the objectives operationally.

The Green Deal was first announced as the Von Der Leyen Commission’s flagship initiative in a Communication in December 2019. The overarching objectives are:

In March 2020 the Commission proposed the European Climate Law to write the 2050 climate neutrality target into binding legislation, which was agreed politically in April 2021 and entered into force in June 2021.

For the implementation of the 2030 objective, the Commission announced in July 2021 a huge package of legislative proposals under the 'Fit for 55' label, i.e. a 55% reduction in emissions.