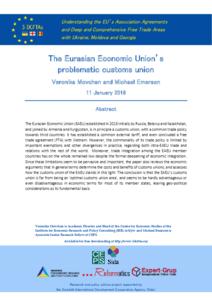 The Eurasian Economic Union (EAEU) established in 2015 initially by Russia, Belarus and Kazakhstan, and joined by Armenia and Kyrgyzstan, is in principle a customs union, with a common trade policy towards third countries. It has established a common external tariff, and even concluded a free trade agreement (FTA) with Vietnam. However, the commonality of its trade policy is limited by important exemptions and other divergences in practice, regarding both intra-EAEU trade and relations with the rest of the world. Moreover, trade integration among the EAEU member countries has on the whole remained low despite the formal deepening of economic integration. Since these limitations seem to be pervasive and important, the paper also reviews the economic arguments that in general terms determine the costs and benefits of customs unions, and assesses how the customs union of the EAEU stands in this light. The conclusion is that the EAEU’s customs union is far from being an ‘optimal customs union area’, and seems to be hardly advantageous or even disadvantageous in economic terms for most of its member states, leaving geopolitical considerations as its fundamental basis.