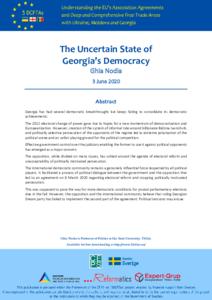 The Uncertain State of Georgia’s Democracy

Georgia has had several democratic breakthroughs but keeps failing to consolidate its democratic achievements.

The 2012 electoral change of power gave rise to hopes for a new momentum of democratization and Europeanization. However, creation of the system of informal rule around billionaire Bidzina Ivanishvili, and politically selective persecution of the opponents of the regime led to extreme polarization of the political scene and an unfair playing ground for the political competition.

Effective government control over the judiciary enabling the former to use it against political opponents has emerged as a major concern.

The opposition, while divided on many issues, has united around the agenda of electoral reform and unacceptability of politically motivated persecution.

The international democratic community remains a genuinely influential force respected by all political players. It facilitated a process of political dialogue between the government and the opposition that led to an agreement on 8 March 2020 regarding electoral reform and stopping politically motivated persecution.

This was supposed to pave the way for more democratic conditions for pivotal parliamentary elections due in the fall. However, the opposition and the international community believe that ruling Georgian Dream party has failed to implement the second part of the agreement. Political tensions may ensue.