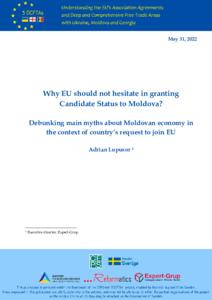 Why EU should not hesitate in granting Candidate Status to Moldova? Debunking main myths about Moldovan economy in the context of country’s request to join EU

The Republic of Moldova signed the request to join EU on the second week after the Russian invasion in EU. This was a logical step for a country looking for a peace and development anchor amid unfolding security threats. It also reconfirmed the government’s strategic European vector that was paved so far by the ongoing Association Agreement with EU (signed in 2014). But to advance on this European path on the background of current security and economic crisis, Moldova needs a clear European perspective provided by EU in the form of Candidate country status and access to EU Single Market. On May 5, the European Parliament adopted a resolution that welcomed Moldova’s formal EU membership application and stated that the EU should grant it candidate status as soon as possible, in line with Article 49 TEU and ‘on the basis of merit’.

The final decision should be made by the European Commission in June, but the uncertainty is fueled by some reluctance in EU about the readiness of Moldova for such an important milestone in its European path. This analytical note will focus on the economic elements of that reluctance: state of the Moldovan economy and its capacity to adapt to shocks, public finances and indebtedness, macro-financial stability and integration on the EU market.

Namely, it will debunk a series of myths about the Moldovan economy and will explain why EU should not hesitate in granting candidate status to Moldova. The analysis shows that the Moldovan economy will be able to withstand the ongoing crisis and recover fast if it will get more access to external funding, EU market and obtain a clear European adherence perspective. It will allow the country to overcome easier both its structural problems (low competitiveness, declining economic potential, low economic diversification) and the ongoing crisis induced by global inflation and war in Ukraine. The analysis shows that, despite its vulnerabilities, the Moldovan economy, if properly supported, will be able to emerge stronger from this crisis due to macro-financial flexibility, low indebtedness, high reserves’ adequacy and, last but not least, stable and credible government.