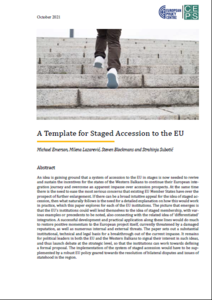 A Template for Staged Accession to the EU

An idea is gaining ground that a system of accession to the EU in stages is now needed to revive and sustain the incentives for the states of the Western Balkans to continue their European integration journey and overcome an apparent impasse over accession prospects. At the same time there is the need to ease the most serious concerns that existing EU Member States have over the prospect of further enlargement. If there can be a broad intuitive appeal for the idea of staged accession, then what naturally follows is the need for a detailed explanation on how this would work in practice, which this paper explores for each of the EU institutions. The picture that emerges is that the EU’s institutions could well lend themselves to the idea of staged membership, with various examples or precedents to be noted, also connecting with the related idea of ‘differentiated’ integration. A successful development and practical application along these lines would do much to restore positive momentum to the European project itself, currently threatened by a damaged reputation, as well as numerous internal and external threats. The paper sets out a substantial institutional, technical and legal basis for a breakthrough out of the current impasse. It remains for political leaders in both the EU and the Western Balkans to signal their interest in such ideas, and thus launch debate at the strategic level, so that the institutions can work towards defining a formal proposal. The implementation of the system of staged accession would have to be supplemented by a robust EU policy geared towards the resolution of bilateral disputes and issues of statehood in the region.

This paper was produced in collaboration with the European Policy Centre (CEP), Belgrade.