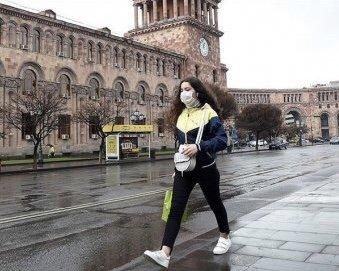 In this analysis for commonspace.eu, Benyamin Poghosyan looks at how Armenia has managed the Coronavirus pandemic so far, and examines the likely massive impact on the economy

The COVID-19 pandemic has confronted governments with two massive simultaneous challenges. They have to contain the virus through large scale social distancing to prevent the uncontrolled growth of infected people and collapse of the health system. Meanwhile, each day that passes with economic activity virtually suspended puts an enormous pressure on businesses, and contributes to a possible social and financial collapse. Armenia faces the same dilemma.

The first case of COVID-19 was identified in Armenia on March 1. Till then Armenia seemed to be far away from the global turmoil caused by the Pandemic. As a precautionary measure the Armenian government cancelled the visa free regime with China at the end of January, and closed the Armenia - Iran land border on February 24. Schools, universities and kindergartens were closed on March 2 and re-opened on March 9 as no new cases were confirmed. However, after a lull of ten days the COVID - 19 started to spread exponentially. On March 16 the government declared one-month national emergency and postponed the April 5 constitutional referendum.

One week of almost complete lock down was declared on March 24, which was than extended till April 13. Citizens are allowed to leave their apartments only to buy food or medicine. Each person should carry ID and fill and keep a special form mentioning his or her address, destination address, the goal of being outside as well the exit and return times. Cars are not allowed to carry more than 2 persons, including the driver. In recent days police checkpoints have been deployed on the country's main highways, extensively preventing travel between the capital, Yerevan, and the regions. Armenia's parliament on March 31, 2020 passed amendments giving the authorities broad surveillance powers to use mobile phone data for tracking Coronavirus cases. The law requires telecommunications companies to provide the authorities with phone records for all of their customers, including phone numbers and the location, time, and date of their calls and text messages. The authorities would use that data to identify, isolate or put in self-isolation, and monitor anyone infected with COVID-19 or those who had been in close contact with infected people. As of April 6, Armenia has 833 cases and 8 deaths, while 62 persons have recovered.

The public attitude towards the outbreak and the actions of government are mixed. Many admit the necessity of strict social distancing, but some are accusing the government of an initial weak response, especially mentioning the Prime Minister's decision to start his campaign for constitutional amendments referendum on March 10, and the fact that the campaign was cancelled only on March 12, a day after WHO declared the COVID-19 a global pandemic. Another controversial decision was not to cancel Milan - Yerevan direct flights implemented by Ryanair - the company had recently entered the Armenian market in January 2020, and the first Milan - Yerevan flight took place on January 14. Ryanair itself stopped all international flights to and from Italy starting March 14. The March 31 law on digital surveillance was largely criticized by the Parliamentary opposition and by many representatives of the civil society, and only ruling My Step faction voted for it.

The Armenian Church continued to serve open-door liturgies in the period 1 - 15 March.  Even though the State of Emergency had not yet been declared, there was some criticism toward the church for that decision. Some circles defended the Church, accusing critics of deliberate efforts to discredit Armenian national traditions and identity. However immediately after the declaration of the national emergency on March 16 His Holiness Karekin II, the Supreme Patriarch and Catholicos of All Armenians, ordered to conduct all liturgies behind closed doors, without the participation of the faithful. The decision also cancelled the service of "Blessing the Children" on Palm Sunday (April 5), and the service of "Blessing of Expectant Mothers" on the Feast of the Annunciation of Blessed Virgin Mary (April 7).

Massive impact on the Armenian economy

Simultaneously, the COVID-19 outbreak has started start putting pressure on the Armenian economy. Armenia witnessed quite a strong GDP growth in the last three years: 7.5 percent in 2017; 5.2 percent in 2018; and 7.6 percent in 2019. Among the key drivers of economic growth in 2019 were the 32 percent increase in copper concentrate export and 14.7 percent increase of tourism sector, Now, due to the COVID-19 outbreak, and the sharp decline in oil prices in March 2020, both the internal and the external environment of the Armenian economy have deteriorated sharply.

The national emergency and the lock down have resulted in the virtual suspension of the Armenian economy. The Russian ruble has lost almost 15 percent of its value as a result of the oil prices slump. This makes Armenian exports less competitive in the Russian market, which remains the top destination for Armenian exports. It's likely Armenia will also face a decline in remittances coming from Russia in 2020. Almost two billion USD remittances were sent to Armenia in 2019, and Russia accounted for one billion 55 million of them. This will also have a significant negative impact on the Armenian economy.

Meanwhile, due to the worldwide travel restrictions the world tourism sector will face its worst year in decades. This means that in 2020 Armenia will lose one of the key pillars of its economic growth. Simultaneously, the economic slowdown driven by the Coronavirus outbreak has already triggered a decline of both the prices and demand for copper. The copper price on the London Metal Exchange at the beginning of April 2020 was USD 4860/t compared to USD 6000/t at the beginning of January 2020.

The, Armenian economy is therefore simultaneously facing multiple negative trends: a sharp decline in tourism sector; a decrease of copper prices; a decline in remittances sent from Russia; and a decline in exports to its key market. The closure of passengers' flow at the land borders with Georgia and Iran, the only two functioning land borders of Armenia, and complications for freight transportation will have an additional negative impact.

Several domestic and international organizations have already predicted a decline of GDP growth in Armenia. The Government envisaged 4.9 percent growth in 2020 budget, but at the beginning of April an Armenian Central Bank assessment put this number as low as 0.7 percent; Asian Development Bank envisaged 2.2 percent GDP growth; and the "Fitch Ratings" assessment put GDP growth for 2020 at 0.5 percent. However, all these assessments are based on the February - mid March 2020 data and can not be perceived as fully reliable due to the rapidly evolving situation.

The Armenian government has already approved 9 projects of economic and social stimulus seeking to alleviate the implications of the crisis. The four economic stimulus projects envisage the injection of 300 million USD in economy. Government will cover interests of loans for several small and medium enterprises. As for social support projects, a one-time payment based on a means-testing scale will be transferred to those families where parents either lost their job in the period of March 13 - 25, 2020 or have no registered jobs. In the latter case each child up to 18 years will receive a 53 USD one-time payment, while parents who both lost their registered jobs or one of them lost registered job while other has no job at all will receive 200 USD one-time payment for each child up to 14 years old.  Employees of companies which have stopped their activities due to the restrictions, as well as sole entrepreneurs, of which there are many mainly in tourism related sectors such as hotels, hostels, cafes and restaurants, will receive one-time payment of between 136-276 USD.

However, since most probably COVID-19 related restrictions will continue for several months, and a return to normality can only be expected around mid or late summer, many Armenians will face decline of their living standards. Armenia can't avoid an economic slowdown, and the key issue is to prevent a repeat of the 2009 situation, when Armenia, as a result of 2007-2008 financial crisis, registered a 14.4 percent decline in GDP. In the present scenario any results better than 10 percent decline in GDP in 2020 could be perceived as a sort of success.

Sources: This analysis was prepared for commonspace.eu by Benyamin Poghosyan, Founder and Chairman of the Center for Political and Economic Strategic Studies in Yerevan.