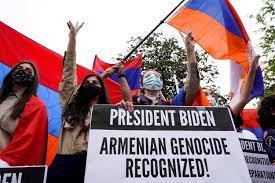 Biden's use of the word "genocide" was a significant moral victory for the Armenian people, however, the geostrategic implications of this for the South Caucasus should not be exaggerated, argues Benyamin Poghosyan in this commentary.

The key message to the world of the Biden Administration is the statement "America is back." Amidst the transformation of the global order from the "unipolar moment" marked by the absolute American hegemony into the more complicated multipolar world, many perceived this statement as proof of the American resolve to actively protect the interests of the US, its allies and partners in the different parts of the region. The South Caucasus, and in particular, Armenia, is not an exception, and many look forward with hope to the renewed involvement of the US in the region in contrast with the low level of attention from the Trump administration. The narrative, popular in some Armenian circles, goes that one reason for the 2020 Karabakh war was the US absence from the South Caucasus, which allowed Russia and Turkey to reshape the regional geopolitics in their favour.

However, the US has decreased its involvement in the South Caucasus since the early 2010s. The last visit of a high-level American official in Armenia took place in June 2012 when then-Secretary of State Hillary Clinton arrived in Yerevan. The reasons behind the decline of the American interest were many – the general shift of the US attention towards the Asia-Pacific, the Ukraine crisis, the decreased significance of Middle East oil for the US. Even Georgia, which signed a Charter on Strategic Partnership with the US in January 2009, complained about the lack of the US reaction towards the so-called "borderisation process" in Abkhazia and South Ossetia.

The Velvet revolution of 2018 raised hopes in Armenia that "the collective West" would significantly increase its assistance to the more democratic Armenia, and would not allow authoritarian Azerbaijan and Turkey to start a war in Karabakh. The 2020 war crashed those hopes, but many in Armenia explained this as a result of President Trump's disdain for human rights and democracy promotion. Thus, according to this logic, the arrival of the Biden administration, with its renewed emphasis on the protection of human rights and democracy, will create a solid base for the US to increase its support to Armenia and protect it from further bullying by Azerbaijan and Turkey.

However, in the United States, the president has only a limited possibility to influence and change foreign policy. Congress and the "Intelligence community" play a significant role in shaping the strategic directions of the US foreign policy. Despite his "America First" rhetoric, President Trump did not make any U-turns in foreign relations. Trump continued the "Pivot to Asia" policy and increased sanctions against Russia, which had started during the Obama administration. The Trump administration provided lethal weapons to Georgia and Ukraine and forced Russia to stop constructing the Nord Stream 2 pipeline in December 2019.

Similarly, there will be no tectonic shifts in US foreign policy towards the South Caucasus and, in particular, towards Armenia, during the Biden Administration. The region will not come back to the forefront of US foreign policy. Strategically America will continue to focus the bulk of its recourses on its strategic rivalry with China. It means the decrease of direct American involvement in other regions, including the Middle East and Eastern Europe. Here the US will commission many tasks to its partners and allies. In the post-Soviet space, the US will continue its efforts to prevent the increase of Russian influence, but Washington will seek to find some modus vivendi with the Kremlin to avoid further destabilisation.

In the South Caucasus, the US will continue to support the "Southern gas corridor" project seeking to add Turkmen gas through the construction of the Trans-Caspian pipeline. America will make efforts not to lose its current level of influence in Georgia through active involvement and mediation in Georgian domestic political developments. The US played a decisive role in solving the political crisis in Georgia in March 2020 and April 2021. Relations with Iran are another aspect of the US interests in the South Caucasus. The key for the United States is to prevent Iran from using the region to circumvent American sanctions and containment policy.

The US will continue its involvement in the Karabakh conflict through its role as a Minsk Group co-chair. In their April 13 statement, Co-Chairs stressed that special attention should be paid to achieving a final comprehensive and sustainable settlement based on the elements and principles well-known to the sides. They called on the parties to resume high-level political dialogue under the auspices of the Co-Chairs at the earliest opportunity. The statement was a clear signal that the Co-chairs, including the US, did not agree with the Azerbaijani position that the 2020 war resolved the conflict. However, besides its role as a Minsk Group co-chair, the US will not take steps to launch a separate US – Armenia – Azerbaijan negotiation format or to radically change the new status quo in Karabakh by demanding from Azerbaijan to withdraw from some of the territories which it took during the war or providing legally binding security guarantees to Armenia or Karabakh Armenians. Until November 2025, the US will leave the role of preventing the resumption of hostilities to Russian peacekeepers.

Another aspect of US-Armenia relations is the recognition of the Armenian Genocide. The Armenian-American community waged a decades-long struggle to reach that goal, which since the 1990s had been supported by the Armenian state. Armenians won their first significant victory in 2019 when the House of Representatives and Senate recognised the Armenian Genocide. The ultimate goal, however, was the use of the "G-word" by the US President. Several American Presidents, including Barack Obama, promised to do that but failed to fulfil promises for different reasons.

Biden promised to recognise the Armenian Genocide during the 2020 campaign, and in his April 24, 2021 address, he used the word Genocide. It was a significant moral victory for the Armenian people and humanity, as the international recognition and condemnation of crimes against humanity are one of the pillars of human development.

Some experts and political circles in Armenia believe that the recognition of the Armenian Genocide by the US President provides an American “Security umbrella” to Armenia and Karabakh. According to this logic, after 24 April 2021, the US will not allow any further hostile actions against Armenia or Karabakh by Azerbaijan or Turkey and will intervene militarily if necessary.

However, this is an exaggeration. The recognition of the Armenian Genocide does not mean that Armenia now is a US treaty ally, and any potential attack on Armenia will automatically trigger the US military response. Armenia is a UN member state, and any attack against Armenia may trigger a US response as any aggression against any independent country, but this has nothing to do with recognition or non-recognition of the Armenian Genocide. The recognition of the Armenian Genocide also does not mean that the US will prevent Azerbaijani hostile actions against Armenians who currently live in Karabakh if Russian peacekeepers leave the territory. The US does not recognise Nagorno Karabakh independence, which means that legally the US perceives Nagorno Karabakh as part of Azerbaijan. Therefore the US has no legal basis to send American troops to Karabakh to fight against the Azerbaijani army in case of the new escalation.

Besides the humanitarian aspect, President Biden's recognition of the Armenian Genocide should be viewed as a part of the new US administration efforts to prove that the protection of human rights has returned to the US foreign policy agenda. This step is also a message towards Turkey. It can be a sign that Turkey is not as significant an ally for the US as Ankara used to be. Turkey is a complicated partner for the US. It rejects the idea to be a pure promoter of the US interests and seeks to implement an independent foreign policy. US-Turkey interests simultaneously clash and converge in many regions of the world. The growing Turkish appetite in the Eastern Mediterranean and limited cooperation with Russia do not correspond with American interests.

Meanwhile, a more assertive Turkey in the South Caucasus and Central Asia is in line with the US interests. Russia and Turkey are unable to come to terms in the South Caucasus fully, and eventually, a strong Turkey in the region will become a headache for Russia. Simultaneously, a powerful Turkey in Central Asia means more possibilities for the US to foster pan-Turkic sentiments in the region and direct them against China. In this complex web of US-Turkey relations, recognition of the Armenian Genocide is one of the available tools, and points of contention. It will not ruin bilateral relations between the US and Turkey but will make Erdogan's domestic agenda more problematic, as the opposition will use this fact in its fight against Turkey's President. In any case, Biden's step will not significantly impact the regional security dynamics of the South Caucasus.

Source: This commentary was prepared for commonspace.eu by Benyamin Poghosyan, Founder and Chairman of the Center for Political and Economic Strategic Studies in Yerevan.

Photo: The US Embassy in Armenia (archive picture)