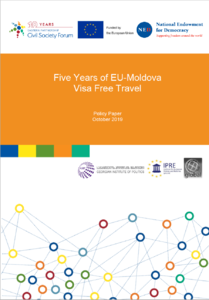 The visa free travel regime with the EU is considered one of the key results of EU-Moldova cooperation since the Eastern Partnership (hereinafter EaP) was launched in May 2009. To date, over 2.1 million Moldovan citizens (over 60% of the population) have travelled to the EU without visas. Moldova continues to respect the requirements for visa free travel to the EU: state-issued documents comply with the International Civil Aviation Organisation (ICAO) security standards. The number of asylum applications from Moldovan citizens to EU countries has increased from 480 in 2014 to 3,835 in 2018. However, the number is still relatively small. The application of the readmission agreement with the EU is well implemented. The Moldovan government has generally complied with requests for readmission of Moldovan citizens and third country nationals.

Some issues remain problematic, however. For instance, important policy actions are needed to reduce the risks of money laundering. Specifically, off-shore jurisdictions should be excluded from certain categories of transactions (including privatisation, public procurement, concessions and public-private partnerships) and there should be increased monitoring of suspicious transactions as well as improved mechanisms for freezing and seizing illegal funds. Additional data from abroad is essential to identify the real assets of public officials and investigate their source. That will allow the Moldovan public to hold officials accountable if allegations are proven, thus reducing the risks of corruptive or criminal activities.