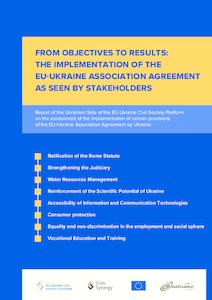 From Objectives to Results: the Implementation of the EU-Ukraine Association Agreement as seen by Stakeholders

The Ukrainian Side of the EU-Ukraine Civil Society Platform.

The assessment was done as an analysis and discussion involving various stakeholders. Its methodology was based on the so-called “goal tree” approach, modeling the necessary decisions and measures to be adopted or implemented by authorized policy-makers in order to fully implement relevant parts and provisions of the Association Agreement – with further retrospective comparison with the decisions and measures adopted and implemented during January 2015 through March 2017, based on criteria of actual existence, adequacy, fullness and openness.

The results demonstrate that the methodological approach to creation of “goal tree” is well suited for proper, full and effective planning of implementation of the heterogeneously prescribed AA’s provisions. This approach can also be applied for clearly specified implementation tasks which are directly prescribed in the main text of the AA (consumer protection) and in cases of concise reference in the AA’s text to the annexes with the list of EU directives to which national legislation should be approximated (anti-discrimination) as well as in cases of absence of “strict” commitments (AA’s provisions such as “parties cooperate” as in case of vocational education).