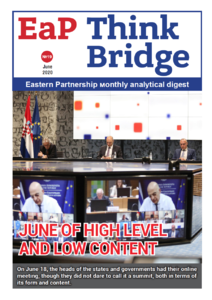 June 2020 was fruitful in events directly related to the Eastern Partnership policy development. On June 11, the EU and Eastern Partnership countries’ foreign ministers had a video conference meeting, and, on June 18, the heads of the states and governments had their meeting in the same format, though they did not dare to call it a summit, both in terms of its form and content.

Although these multilateral meetings and summits created the impression of great interest in the Eastern Partnership, at the same time, no joint statements or declarations were adopted based on their results. And in general, in early June, there was still no confidence in the summit dates, the course of preparations to the event was unclear, and it was repeatedly proposed to postpone it.