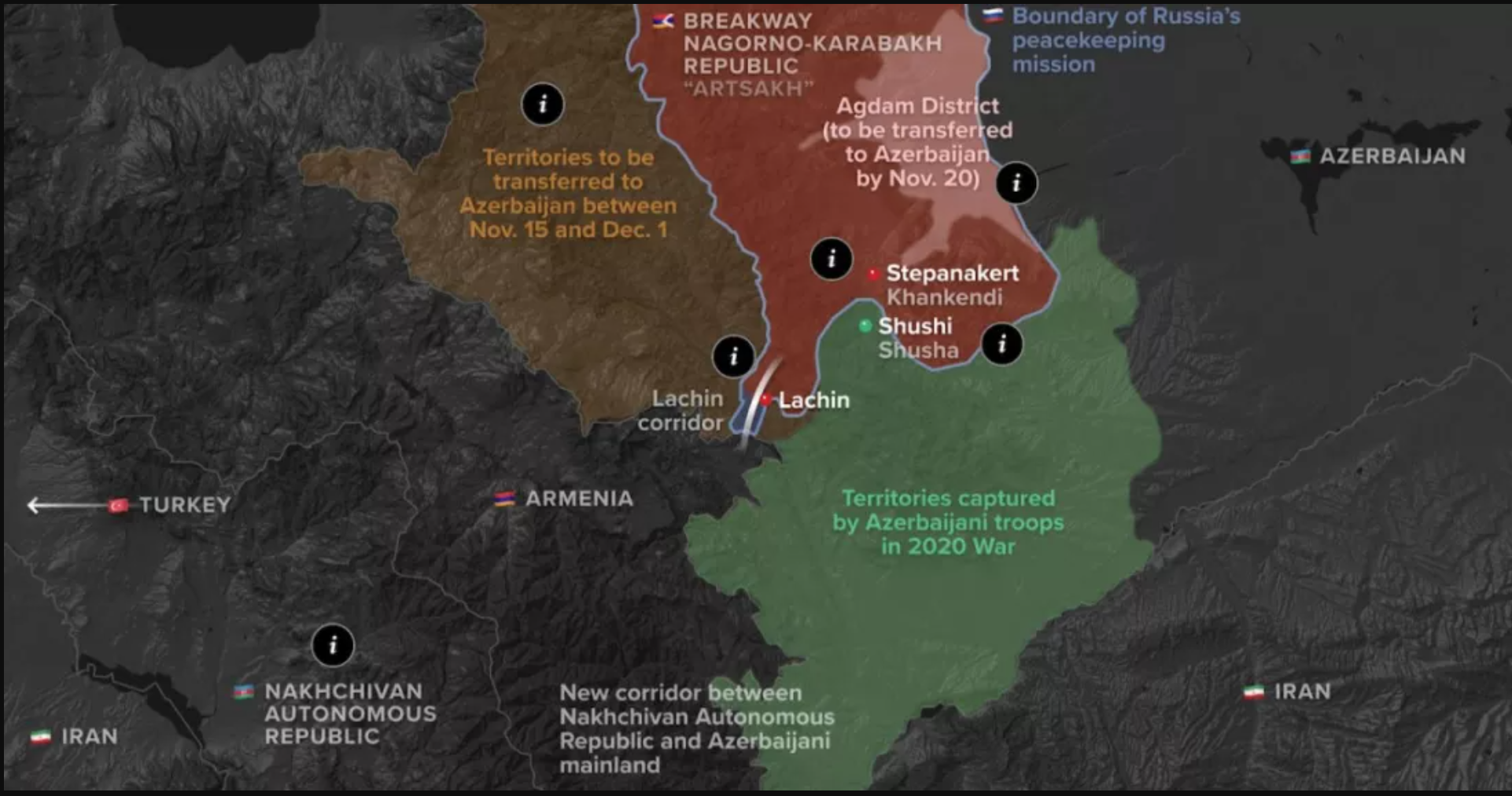 Photo: A map of the new distribution of territory under the 10 November 2020 agreement between Russia, Armenia and Azerbaijan (picture courtesy of the press service of the Ministry of Defence of the Russian Federation).

Azerbaijan, Turkey, and Russia all gained something as a result of the second Karabakh war, while Armenia and Nagorno-Karabakh lost almost everything, says Benyamin Poghosyan in this op-ed.

The second Karabakh war ended with catastrophic results for Armenia and the Nagorno-Karabakh Republic. The trilateral statement signed by Russian, Armenian, and Azerbaijani leaders on November 10 was a clear capitulation of the Armenian sides. During the 26 long years of negotiations under the auspices of the OSCE Minsk Group, several settlement plans have been elaborated and offered to the conflict sides – the phased deal in December 1997, the union state in 1998, the Key West deal in April 2001, the Kazan document in June 2011 and the Lavrov plan since 2014. However, none of them were as disastrous for Armenia and the Nagorno-Karabakh Republic as the trilateral statement of November 10, 2020.

Previous deals envisaged the return of territories considered by Armenians as a "security zone" to Azerbaijan, but not all territories immediately, and with clear linkage with the future status of Nagorno-Karabakh. This status to be decided either through future negotiations (December 1997 deal and Lavrov plan) or through a legally binding referendum (Kazan document), or – as in the Key West model – for Karabakh of the 1988 borders to be declared as part of Armenia but Yerevan obliged to provide a corridor from Azerbaijan proper to Nakhchivan. Instead, the 10 November 2020 deal not only envisages the immediate return to Azerbaijan of all seven regions (four have been under Azerbaijani control as a result of hostilities, and three should be returned by December 1, 2020), but also accepts Azerbaijani control over 2000 square km of Nagorno-Karabakh proper. Thus, from 11450 square km of territory, only up to 2500 square km are left outside of Azerbaijani control. Furthermore, there is not a single word about Karabakh's status, and Armenia agreed to provide a land corridor from Azerbaijan proper to Nakhchivan, which will be under the control of Russian border troops.

Time is needed to thoroughly analyse the reasons for this disaster. However, some preliminary assessments can be made. Armenia and Nagorno-Karabakh failed both militarily and diplomatically. The Armenian sides were absolutely not ready to fight against an Azerbaijani army that was significantly strengthened by Turkish drones, Turkish military advisors, and Syrian mercenaries. After the 2018 "Velvet revolution", the Armenian Minister of Defence put forward a new "active deterrence strategy". In late March 2019, during a visit to the United States, Davit Tonoyan openly rebuked the "land for peace" formula for conflict resolution and called on Armenia to prepare to pursue a "new war for new territories" doctrine. However, the second Karabakh war proved that Armenia prepared to fight only Azerbaijan, and missed the growing involvement of Turkey in Azerbaijan.

Armenia was isolated also diplomatically. Georgia pursued a policy of "hostile neutrality", de facto supporting Azerbaijan, while Iran has no pro-Armenian stance. The EU did nothing besides neutral statements which had zero impact on the ground. France's President Macron was seeking to galvanize some anti-Turkish support in the EU using the Karabakh issue as leverage against President Erdogan but reached no results. The US was fully embroiled in Presidential elections and organised only a meeting in Washington with zero results.

Armenia's only ally – Russia –  was annoyed by Armenia's rejection of Lavrov's plan in April 2020, and had only one objective – to deploy Russian peacekeepers in Nagorno-Karabakh and establish a fourth military base in the South Caucasus along with bases in Armenia, Abkhazia, and South Ossetia. Given some strange anti-Russian moves by Pashinyan’s government during its two-and-half-year tenure, Russia had no interest in stopping Azerbaijani aggression – viewing it as a good option to force Armenia to agree to the deployment of Russian peacekeepers. For the same reason, Russia could not allow the total defeat of Nagorno-Karabakh. That is why Russia was providing weapons to Armenia during the war, but not in quantities that would allow the Armenian sides to repel Azerbaijani attacks. Simultaneously, Russia was in active contact with Turkey and, most probably, the draft of the 10 November trilateral statement was elaborated during the 7 November 2020 Putin–Erdogan and Lavrov–Cavusoglu phone calls. Thus, Azerbaijan, Turkey, and Russia all gained something as a result of the second Karabakh war, while Armenia and Nagorno-Karabakh lost almost everything.

The Nagorno-Karabakh Republic lost approximately 80 percent of its territory, while in the remaining parts, infrastructure is badly damaged. Some 90000 people have left for Armenia and at least 25000 can't return as their lands are now under Azerbaijani control. Others should wait for the reconstruction of civilian infrastructure, which may take months if not years. Meanwhile, the deployment of 1960 Russian peacekeepers in Karabakh has effectively made Karabakh a Russian protectorate. The governmental bodies of the Nagorno-Karabakh Republic nominally continue their activities (President, Government, National Assembly, Defence Army), but obviously, the real kingmaker in Karabakh is now Russia. Peacekeepers have been deployed for a period of five years, but most probably, Russia will take steps to extend their stay as much as possible. Thus, Russia transformed Karabakh into another Transnistria, but with a much more hostile environment, as the new war only hardened the animosity between Armenians and Azerbaijanis, which make any possibility of reconciliation very remote.

However, the new war did not solve the conflict. Despite the disastrous defeat of Armenia and Nagorno-Karabakh, up to 2500 square km of Karabakh territory is still inhabited by Armenians and is now under Russian control. These people will never accept any status within Azerbaijan, and Azerbaijan has already stated that the status issue is closed for them. Thus, both sides will use the presence of Russian peacekeepers to prepare for the next war. During the next war, Azerbaijan will have much better starting positions than on 27 September 2020.

Armenia should take necessary lessons from its painful military and diplomatic failure. Armenia should reconsider its foreign and defence policy and have a clear and better understanding of what states may support it to bring back lost territories.

Benyamin Poghosyan is the Founder and Chairman of the Center for Political and Economic Strategic Studies in Yerevan, Armenia.