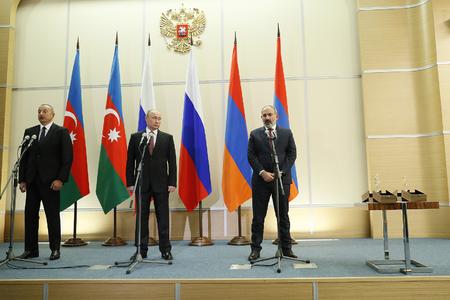 November 26 trilateral meeting in Sochi: What next?

The Russian resort town of Sochi was turned into the spotlight of South Caucasus geopolitics on November 26 as Russian President Vladimir Putin hosted Armenian PM Nikol Pashinyan and Azerbaijani President Ilham Aliyev for the much-anticipated trilateral meeting. The gathering was first announced by the Russian President’s Press-Secretary Dmitri Peskov to be held on November 8–12 to mark the first anniversary of the November 10, 2020, trilateral statement, which fixed the devastating defeat of Armenia in the 2020 Karabakh war. Some Armenian media leaked news about the upcoming meeting even earlier, arguing that another document violating Armenia and Nagorno Karabakh’s vital national interests was in the works. At the last minute, Armenia asked to postpone the meeting, followed by a significant increase of Azerbaijani diplomatic and military pressure over Armenia, including the large-scale Azerbaijani attack on November 16, resulting in the loss of additional territories in the Vayots Dzor province and multiple casualties. During his November 23 press conference, the Armenian Prime Minister stated that he had asked to postpone the meeting to avoid the negative symbolism. However, if Armenia only asked to postpone the meeting for a few days or a week, the harsh Azerbaijani reaction was irrational.

According to leaks and assessments of experts and pundits, leaders were going to discuss two main topics during the meeting: the start of delimitation and demarcation of Armenia and the restoration of communications in the region. Azerbaijan had an unequivocal position on both issues. The delimitation and demarcation process may start after the sides agree on principles, and the fundamental principle should be the mutual recognition of territorial integration based on the Soviet borders. This means that Armenia should recognize Artsakh as part of Azerbaijan. Azerbaijan clearly articulated its position on the issue of restoration of communications. Azerbaijan should receive highway and railway access via the Syunik province to reach the Nakhichevan Autonomous Republic without any Armenian passport, customs or border control. As the worst-case scenario, Azerbaijan hinted that it might accept Russian control over these routes, de facto creating Lachin corridor 2.0 in the Syunik province. Meanwhile, Azerbaijan is not ready to provide the same conditions for Armenia to use Azerbaijani territory to reach Iran and Russia. Armenian cars and trucks should pass through full Azerbaijani passport, borders and customs control procedures.

The Armenian position on the issue of delimitation and demarcation lacks clarity. Armenian officials stated that Yerevan was ready to launch the process based on Soviet times, referring to the 1920s maps of the Transcaucasian Federation. They argued that this process would have nothing to do with Artsakh’s borders or its future status, but this statement lacks any substantive argument. Yerevan also demanded the withdrawal of Azerbaijani troops from its sovereign territories before the process of delimitation and demarcation. Armenia had a clearer position on restoring transportation routes, stating that Armenia should exercise full control over border crossings and routes.

The Sochi summit started with the bilateral Putin–Aliyev meeting, even though Pashinyan had arrived in Sochi earlier than his Azerbaijani counterpart. Then, Putin hosted a trilateral meeting that lasted more than three hours. The leaders signed a one-page statement and made speeches. The summit ended with a Putin–Pashinyan bilateral meeting followed by President Putin’s meeting with the permanent members of the Russian Security Council.

The trilateral statement of November 26 has vague wording and meets the criteria of constructive ambiguity used so often during international negotiations. All sides confirmed their willingness to implement the previous statements of November 10, 2020 and January 11, 2021. There was nothing concrete on the delimitation and demarcation process, only a short paragraph on an agreement to take steps to increase the stability and security along the Armenia–Azerbaijan borders and later establish a bilateral Armenia–Azerbaijan commission on delimitation, which will receive consultation from the Russian side upon the request.

The sides also praised the work done by the trilateral commission on the restoration of communications and expressed the necessity to launch concrete projects as soon as possible to realize the region’s economic potential.

President Putin presented more details during his statement after the negotiations. He announced that the next meeting of the trilateral commission on communication issues chaired by Vice Prime Ministers would take place within a week, and it will disclose agreements reached by the leaders. However, during his bilateral meeting with PM Pashinyan, Putin said that some disagreements remained on this issue, while the leaders had reached a complete understanding of practical, pure economic issues. This means that Armenia disagreed with Azerbaijani’s demand to provide uncontrolled access via the Syunik province to reach Nakhichevan. It is unlikely that Azerbaijan dropped this demand; so most probably, the trilateral commission would announce routes of highways and railways and some road map of realization of the projects, but negotiations would continue on the issues of control. President Putin also announced that the sides agreed to elaborate mechanisms of delimitation of the Armenia–Azerbaijan border until the end of 2021. It is challenging to assess the reasons behind serious discrepancies for this issue between the signed text and Putin’s oral statement. Steps to stabilize the situation along the border have nothing in common with mechanisms of delimitation. However, the vague wording of the statement may indicate that both sides could not reach any breakthrough.

Azerbaijan certainly is not satisfied by the results of the meeting. Armenia did not sign the text with explicit mention of recognition of Azerbaijani territorial integration within Soviet borders and did not agree to provide uncontrolled access via the Syunik province. Most probably, Azerbaijan will continue its strategy of coercive diplomacy and military blackmail, making new efforts to penetrate deeper into Armenian territory and force Armenia to accept all its demands. Russia has indicated that it would avoid a direct military clash with Azerbaijan as it would trigger an acute political crisis with Turkey, which Russia has zero interest in facing. The other power, which may force Azerbaijan to stop its future military incursions without realizing its demands, is the US through threats or actual impositions of sanctions on Azerbaijan’s economy and President Aliyev’s family’s personal assets. However, the US would not do that as it would ruin US–Azerbaijan relations and significantly complicate US goals in the South Caucasus – to foster the southern gas corridor realized by Azerbaijan and significantly restrict Iran’s options in the region.

Thus, the Armenian army is the only reliable tool to prevent further advancement of Azerbaijani forces into Armenian territories. Only successful resistance may deprive Azerbaijan of its tool of military blackmail. Otherwise, Armenia will continue to suffer casualties and simultaneously lose more territories.

Photo: Office of the Prime Minister of the Republic of Armenia