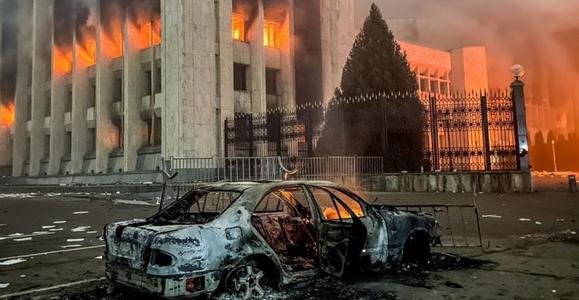 Opinion: The implosion of Kazakhstan was unexpected, and it has implications for the whole post-Soviet space

"We need time to understand better what happened in Kazakhstan, and why", writes Benyamin Poghosyan in this op-ed. Whilst sending CSTO troops to Kazakhstan was clearly President Putin's decision to support President Tokayev in the internal fight between Kazakh local elites, the deployment has implications also for other countries participating in the mission, including Armenia, he argues.

The beginning of 2022 surprised many. While experts and pundits were busy discussing the possible outcome of the Russia – US and Russia - NATO negotiations, scheduled for early January, and seeking to predict if large-scale hostilities would break out in Ukraine, Kazakhstan imploded.

This vast country with less than 20 million population, with huge reserves of oil, uranium, and other minerals and a significant geographical location connecting China with Russia and Europe, seemed to be an island of stability in the vast landmass of Eurasia. President Nursultan Nazarbayev had ruled the country since its independence, and while he stepped down in 2019, he  maintained his influence and control from the position of Chairman of the Security Council. The second President of Kazakhstan, Kassym-Jomart Tokayev, a professional diplomat who started his career in the Soviet Union, seemed to be an excellent choice for Nazarbayev, enabling him to organize a smooth power transition, keep the stability of the country, and his primordial leading position.

Kazakhstan has a history of social unrest, such as the events in December 2011, when a protest by oil industry workers turned violent and resulted in more than ten deaths in the Western city of Zhanaozen. The rising social inequality, internal migration from the villages to the big cities, especially to the former capital Almaty – which resulted in rising levels of unemployment, and the lack of social mobility, contributed to a growing resentment among low and middle classes of the society.

When on January 2, 2022, protests started in Zhanaozen against the spike of the liquefied petroleum gas prices many thought this was another social protest that would be stifled very quickly. Surprisingly, the unrest spread fast to other cities, including Almaty, and turned violent. Amidst rumors about tens if not hundreds killed, and attacks against state buildings and law enforcement bodies, the domestic political situation turned upside down. On January 5, 2022, President Tokayev stated that he was assuming the post of Chairman of the Security Council, effectively dismissing Nazarbayev, and was ready for tough action. On the same day, the government of Kazakhstan resigned, and Tokayev appointed a new, acting Prime Minister. Perhaps the most significant change was the dismissal of Karim Masimov as the head of the National Security Committee. Masimov was a staunch Nazarbayev loyalist who served as Prime Minister from 2007 to 2012 and 2014-2016, working as Nazarbayev’s chief of staff in the interim before being appointed as the head of the security service. Almost immediately after the dismissal, Masimov was arrested on charges of treason. This developing drama led many experts to believe that the local elites used the initial domestic protests based on the deteriorating social-economic situation as a tool to solve internal rivalries. Probably President Tokayev decided to focus the protest against former President Nazarbayev, pushing forward slogans such as "Old man, go away." At the same time, Nazarbayev sought to hit back by using his control over the security services to turn protests violent, and maybe to push for the resignation of Tokayev.

However, besides domestic rivalry, Kazakhstan's unfolding crisis also has an external dimension. On January 5, 2022, Tokayev applied for help to the Collective Security Treaty Organization (CSTO), a Russia - led six-member military alliance, citing terrorist threats supported by external forces. CSTO reacted almost immediately; only a few hours after Tokayev's appeal, it decided to send its collective peacekeeping forces to Kazakhstan for a limited period to stabilize and normalize the situation. The decision was announced by Armenian Prime Minister Nikol Pashinyan, the current chair of the CSTO's Collective Security Council. As Russia is the sole de-facto decision-maker in CSTO, sending troops to Kazakhstan was clearly President Putin's decision to support President Tokayev in the internal fight between Kazakh local elites. It is challenging to fix all factors behind the Russian decision to assist Tokayev against Nazarbayev loyalists. As recently as December 28, 2021, Putin met with Nazarbayev in Saint Petersburg, thanked him for initiating the creation of the Eurasian Economic Union, and praised Nazarbayev's role in pushing the integration processes in the post-Soviet space.

Some analysts believe that Russia was concerned about Nazarbayev's alleged active role in establishing the Organization of Turkic states, and the growing ties between Nazarbayev's inner circle and Turkey. The revamped structure was established in November 2021 and unites several Turkic-speaking states of the former Soviet Union. Russia might perceive this step as another attempt by Turkey to encroach on the sphere of Russian special interests. Since Turkey's failed military coup attempt in July 2016, Russia and Turkey have enjoyed a special relationship based on economic interests and shared distrust towards the US. However, Erdogan may leave power in 2023, and the new Turkish leadership may pursue a less antagonistic policy towards the US. In this case, Turkey's influence in the South Caucasus and Central Asia may be well used by the US in its Russia containment strategy. Other experts argue that Russia was irritated by the position of Nazarbayev to prevent the political integration within Eurasian Economic Union and keep the organization as a purely economic union.

We need time to understand better what happened in Kazakhstan, and why. Meanwhile, the decision by Armenia to send 100 soldiers to Kazakhstan as a part of the CSTO peacekeeping mission will have negative implications for Armenia. No one expected Yerevan to veto the decision to intervene once Russia had made up its mind, but the Armenian government could have decided not to send Armenian troops to Kazakhstan. Armenia could have cited Azerbaijan's continuing occupation of Armenian territories as a reason, saying that it cannot deploy Armenian troops outside Armenia when the country is under aggression.

The West views the decision to deploy CSTO troops in Kazakhstan through the authoritarian powers fight against democratic movements paradigm. The US Department of State has already questioned the legitimacy of the CSTO military deployment, and on January 7, 2022, US Secretary of State Antony Blinken warned that Kazakhstan would find it challenging to lower Russian influence after inviting in troops to quell unrest. "I think one lesson in recent history is that once Russians are in your house, it is sometimes tough to get them to leave," Blinken told reporters. Many Western experts depict the situation as Kazakhstan's occupation by the CSTO and Russia, comparing these events with the Soviet Union's decision to send troops to Budapest in 1956 and Prague in 1968. Given the peaceful transfer of power in Armenia as a result of the spring 2018 street protests, some Western circles criticize Prime Minister Pashinyan’s decision to send troops to Kazakhstan to fight against protestors, depicting Armenia as a part of Russia- led authoritarian club, which chose the side of authoritarianism against liberal democracy. The social media is full of statements and arguments about Armenia sending troops to Syria in 2019, Kazakhstan in 2022, and speculations about Armenian troops to be sent to Ukraine as part of Russian units in case of a Russian military invasion.

Azerbaijan will use this momentum to discredit the Armenian government in the West seeking to close the gap between Armenian and Azerbaijani democratic credentials. If Armenia is as authoritarian as Azerbaijan, there is no need for the Western governments, expert circles, or society to support Armenia against Azerbaijan based on democracy and values. At the same time, in purely geopolitical terms, Azerbaijan is much more important for the West than Armenia. Thus, the best choice for Armenia would have been to support the decision to send CSTO troops to Kazakhstan, but not to include Armenian soldiers in the mission. Armenian soldiers in Kazakhstan will harm Armenia's image and standing in the West and will not benefit the country.

source: Benyamin Poghosyan is the Founder and Chairman of the Center for Political and Economic Strategic Studies in Yerevan.

The views expressed in opinion pieces and commentaries do not necessarily reflect the position of commonspace.eu or its partners