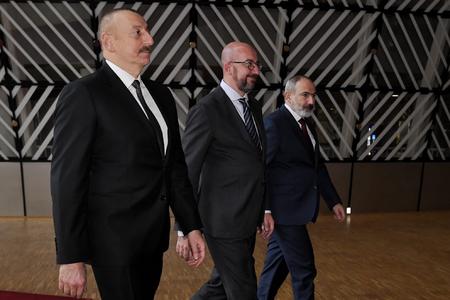 Pashinyan and Aliyev meet in Brussels again: What next

On May 22, 2022, Armenian Prime Minister Pashinyan and Azerbaijani President Aliyev met in Brussels. The meeting was facilitated by the President of the European Council Charles Michel. For many observers, the May 22 trilateral meeting created a feeling of déjà vu. The same leaders were in Brussels less than two months ago. On April 6, 2022, Michel organized another meeting between Armenian and Azerbaijani leaders with the same sequence and results. Michel met separately with two leaders, then they held hours-long trilateral discussions, and late in the night, he published a statement summarizing the results. On April 6, participants discussed the same issues as on May 22 – the restoration of communications, the start of the border delimitation and demarcation process, and the launch of negotiations to sign a bilateral Armenia-Azerbaijan treaty.

These three issues are also being discussed in Moscow during meetings mediated by Russia. After and before April 6, Armenian and Azerbaijani leaders spoke with Russian President Putin. On May 12, Armenian, Azerbaijani and Russian ministers of foreign affairs met in Dushanbe. The establishment of two parallel negotiation platforms resulted from the de facto collapse of the OSCE Minsk Group co-chairmanship—the only body with an international mandate to mediate the settlement of the Nagorno Karabakh conflict. The co-chairmanship found itself in an intensive care unit after the 2020 Karabakh war and lost its last functional features after the start of Russia’s “special military operation” in Ukraine. The co-chairmanship embodied the joint Russia-West involvement in the Karabakh conflict. When Russia-West relations became ruined entirely after February 24, the mediation process was split into two separate tracks.

On April 6, 2022, Armenia and Azerbaijan agreed to establish a border demarcation commission until the end of April. The sides reached the principal agreement on this issue back in November 2021 during a trilateral meeting in Sochi. As both sides failed to keep the agreed timetable, this issue was brought up again during the May 22 meeting, and finally, Armenia and Azerbaijan published the personal composition of commissions on May 23. On May 24, the first meeting between heads of the commissions took place on the Armenia-Azerbaijan border. This process may take years or even decades. Azerbaijan and Armenia disagree on the legal framework of the process and maps to be used. Given the sensitivity of these issues, any quick solutions are improbable. Armenia has not finalized its border demarcation even with friendly Georgia.

The restoration of communications is another tricky issue. The work started in early 2021, as Armenia, Azerbaijan and Russia established a trilateral commission led by deputy prime ministers. Again, all agreed timetables were breached, and no commission meeting took place after December 2021. The sides presumably agreed on the railroad route – Azerbaijan-Armenia (Syunik)-Nakhichevan, Armenia-Nakhichevan-Iran, Armenia-Azerbaijan-Russia. During several meetings held in Brussels and Moscow, statements have been made that the sides also agreed on border control, customs fee, transit procedures and other issues.

However, immediately after every meeting, Armenia and Azerbaijan interpreted the results differently. Azerbaijan speaks about the agreement to open the “Zangezur corridor,” meaning no Armenian border and customs control for Azerbaijani persons and goods passing through Syunik. Otherwise, Azerbaijan demands establishing border and customs control in the Lachin corridor, which connects Armenia and Nagorno Karabakh and is currently controlled by Russian peacekeepers. Armenia rejects these ideas and claims that the Azerbaijan-Nakhichevan connection via Armenia has nothing to do with the Lachin corridor and that Armenia will implement border and customs control. The same contradictions also appeared after the May 22 meeting. President Aliyev told President Erdogan that an agreement was reached in Brussels to establish the “Zangezur corridor.” At the same time, the secretary of the Armenian security council stated that Armenia never discussed anything within corridor logic.

Armenia has yet to start any work to restore the railway in the Syunik region along the Araks river, arguing that a separate agreement should be signed with Azerbaijan before starting the work. Azerbaijan recently signed agreements with Iran to create a transport corridor to Nakhichevan via Iran by constructing highway and railway bridges that would connect Azerbaijan with Iran and Iran with Nakhichevan. Thus, despite optimistic statements after each meeting, much is unclear in this track.

However, it seems that the Armenian government has changed its position and is ready to recognize NK as part of Azerbaijan if Azerbaijan protects the rights of the Armenian population. The Armenian Prime Minister hinted at this during his press conferences in December 2021 and January 2022 and during his speech in Parliament on April 13, 2022. The Western partners welcomed this change of attitude of the Armenian government, viewing it as a possibility to finally settle the Karabakh conflict and bring long-term stability to the region. The quest for peace and stability is not the only motive behind the West’s positive attitude toward the change in the Armenian government’s approach. The West believes that if Armenia and Azerbaijan agree on the status of Nagorno Karabakh, Azerbaijan may demand the withdrawal of Russian peacekeepers from Karabakh after November 2025.

The withdrawal of Russian peacekeepers from Karabakh will decrease the Russian influence in Azerbaijan and the South Caucasus. It is entirely in line with the Russia containment strategy pursued by the West. Meanwhile, Russia has a strategic goal to have a permanent military presence in Nagorno Karabakh. Russia understands that military presence is possible only if Armenians continue to live in Nagorno Karabakh. The Kremlin also believes that the Armenia-Azerbaijan agreement on NK status may pave the way for Azerbaijan’s and the West’s demands to withdraw Russian troops from NK. As for Armenians in Karabakh, their position is very straightforward: Nagorno Karabakh will never be part of Azerbaijan under any circumstances. Thus, Russia is interested in launching Armenia-Azerbaijan negotiations over the bilateral treaty and does not want to see Armenia signing a document that will declare NK as part of Azerbaijan. In this context, if the Armenian government proceeds toward legally recognizing NK as part of Azerbaijan, it will jeopardize the vital national interests of Armenia and antagonize Russia. By legally recognizing NK as part of Azerbaijan in the future Armenia-Azerbaijan treaty, the Armenian government will contribute to Western efforts to decrease Russian influence in the South Caucasus. However, as the majority of the politically active part of the Armenian society rejects this option, and as Russia does not want to see being pushed out of the region, the likelihood of the Armenian government’s recognition of NK as part of Azerbaijan is little. In the coming months and years, we will probably see the slow advancement on all three Armenia-Azerbaijan tracks, but any real breakthroughs are unlikely.