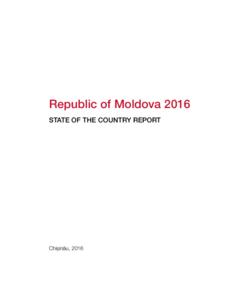 Republic of Moldova 2016: State of the Country Report

The Independent Think-Tank Expert-Grup in partnership with the Friedrich-Ebert-Stiftung is launching today, the 30th of September, in the framework of the 4th Edition of the Annual International Conference MACRO 2016, the State of the Country Report 2016.

The experts ascertain that the Republic of Moldova, at her early age of 25th years of independence, is confronting one of the most acute crises in its short history. After the economic, currency and banking shocks of 2015–2016, Moldova has become more vulnerable than ever, entering a period of anemic economic growth, which could last for at least five years. Besides the external constraints, the fundamental cause aggravating Moldova’s economic condition is related to major governance failures in the recent years, intensified by the “brain-drain” phenomenon.

The International MACRO Conference 2016 provides a high-level intellectual platform for debate between the key actors. The 4th edition of the conference hosts 13 speakers from 5 countries: Georgia, Armenia, France, Romania and Moldova and over 100 participants, including political leaders, policy makers, representatives of local governments and the private sector, local and foreign experts, representatives of CSOs and academia in Moldova.

The “Moldova 2016 State of the Country Report” provides analytical support for the discussions within the MACRO Conference, especially in what concerns the financial sector, the social sector and the human capital, as an instrument to restore Moldova’s competitive advantage.

The main conclusions of the State of the Country Report are as follows: